Items related to I am That

Maharaj Nisargadatta I am That 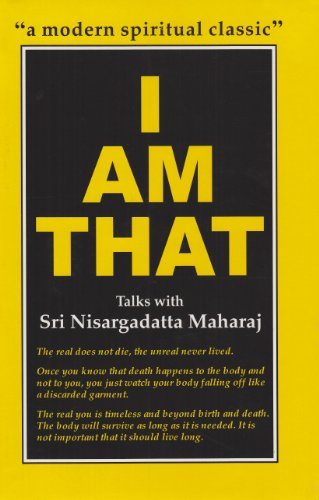 Ever since it was originally published in 1973 "I AM THAT" a modern spiritual classic has run into reprint (Paperback and Hardcover both put together) seventeen times.That is the kind of popularity the book is enjoying.

I Am That is a legacy from a unique teacher who helps the reader to a clearer understanding of himself as he comes to Maharaj,the spiritual teacher, again and again with the age-old questions,"where am I" "who am I" and "whither am I".The listeners were never turned away from the humble abode of Maharaj then and are not turned away now!

A simple man,Sri Nisargadatta Maharaj was a house holder and petty store keeper in Bombay where he lived and died in 1981 at the age of 84.He had not been educated formally but came to be respected and loved for his insights into the crux of human pain and the extraordinary lucidity of his direct discourse.Hundreds of diverse seekers travelled the globe and sought him out in his unpretentious home to hear him.To all of them he gave hope that "beyond the real experience is not the mind,but the self,the light in which everything appears...the awareness in which everything happens."

Sri Nisargadatta Maharaj did not propound any ideology or religion but gently unwrapped the mystery of the self.His message is simple,direct and yet sublime.

I AM THAT: Talks with Sri Nisargadatta Maharaj (HB)