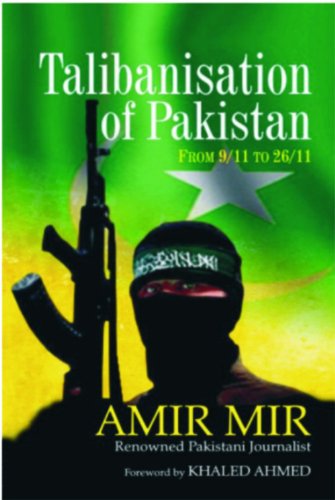 Deals with the scenario in Pakistan, its conversion to a state ruled by Islamist extremists, has been critically acclaimed by the media in Pakistan.

"The book states that while the Pakistani establishment under President Pervez Musharraf has been making overt noises about clamping down on the terrorists outfits, they had implemented only half hearted measures against them. The book dwells upon the decision makers in the white house." --Martin van Creveld

Book Description Pentagon Press, India, 2009. Hardback. Condition: New. Language: N/A. Brand new Book. Media Appreciation: Pakistan's sincerity in dealing with terrorists operating from its soil has always been a subject of speculation. As India prepares for some serious stocktaking on the first anniversary of the 26/11 attacks, concerns remain about the possibility of similar terrorist attacks being launched from Pakistan in the future. Amir Mir shows in his book how Talibanisation began with Gen Zia-ul-Haq and continued to flourish even under the man who joined the US-led war against terror-General Musharraf. Describing the terror outfits-particularly those involved in Jammu & Kashmir and elsewhere in India-as the 'civilian face of the Pakistani army', Mir acknowledges how the current situation in Pakistan is a direct result of Islamabad using terrorism as a foreign policy tool to deal with India and in its quest for geo-strategic depth in the region. Outlook, India, December 7, 2009. Talibanisation of Pakistan takes the lid off all the lies and contradictions dished out on a daily basis by Pakistani military and the military-controlled government, which is losing its governable ground at a disturbing pace to the very Frankensteins spawned by the Pakistan Army over the past decades. Also, what this book dwells on is not only the disturbing aspect of Pakistan yet again reaching the brink with unprecedented developments, but how many of these adversely affect India, Afghanistan, the United States in its war on terror there, even Britain, and obviously Pakistan itself. The Asian Age, India, October 28, 2009 Talibanisation of Pakistan covers all the significant facts about the rise and rise of the Taliban in Pakistan and combines purposeful theoretical investigation with good use of history and empirical evidence. For its historical and political examination of Talibanisation, the book is a valuable work and a 'must read' for anyone who wants to understand how Pakistan can respond to acts of terror. Amir Mir's strength lies in the building up of case studies in an historical context to illustrate the dimensions of this amorphous phenomenon. The author draws in the reader with skill rarely seen in nonfiction writing. This extremely complex issue is dealt with in a unique yet straight forward manner. The book has the obvious authority of high quality research. The News International, Pakistan, October 19, 2009. Seller Inventory # AMO9788182744332

Book Description PAPERBACK. Condition: New. Book Cover and ISBN may be different from US edition but contents as same US Edition. Excellent Quality,Quick delivery by USPS/UPS/FEDEX/DHL/ARAMEX, We may ship the books from Asian regions for inventory purpose. Our courier service is not available at PO BOX. Seller Inventory # abe_jan_9788182744332