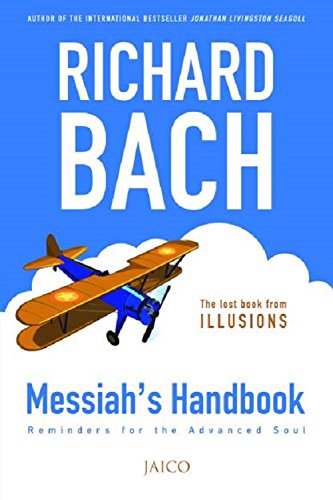 The hero of Bach's bestselling book Illusions (published by Doubleday) carried a small volume entitled THE MESSIAH'S HANDBOOK. For decades Bach fans have had one wish: to read the handbook for themselves. Here it is. This edition contains never-before-seen wisdom along with passages from many of Bach's multi-million copy selling works including Jonathan Livingston Seagull. Where did you learn all this stuff, Don? You know so much, or maybe I just think you do. No. You do know a lot. Is is all practice? Don t you get any formal training to be a Master? They give you a book to read. And here is the book. Donald Shimada, the mysterious hero of Richard Bach s bestselling book, Illusions, which is soon to be a major motion picture. Shimada seemed to carry the keys to universe with him as he barnstormed the Midwest in a Travel Air biplane. Is he a teacher or a messiah? Part of Shimada s secret was a small book, bound in what looked like suede, called Messiah s Handbook, which he carried with him and frequently quoted. Open it, he said, and whatever you need to know is here. As Bach was taught by Shimada, hold a question in your mind . . . close your eyes . . . open the handbook at random . . . pick left page or right . . . open your eyes and read the answer to your question. Here is never-before-seen wisdom, taken from many of Richard Bach s extraordinary books. The wisdom in this book is profound. As in: Here s a test to find whether your mission on earth is finished: If you re alive, it isn t.

Richard Bach is the author of seventeen books, including Jonathan Livingston Seagull, Illusions, and The Bridge Across Forever. His books have sold tens of millions in over 40 languages throughout the world. Back to back, his work has been on the New York Times bestseller lists for more than four years. He deals, most simply and effectively, with ideas that have the power to change the world . He is still one of the most quoted authors of our time. He lives near Seattle, Washington.

Part of Shimoda's secret was a small book. It has been lost for decades and rediscovered here.

Book Description PAPERBACK. Condition: New. Book Cover and ISBN may be different from US edition but contents as same US Edition. Excellent Quality,Quick delivery, We may ship the books from Asian regions for inventory purpose. Our courier service is not available at PO BOX. Seller Inventory # nt_9788179927274