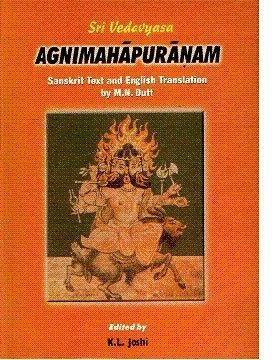 Book Description PAPERBACK. Condition: New. Book Cover and ISBN may be different from US edition but contents as same US Edition. Excellent Quality,Quick delivery by USPS/UPS/FEDEX/DHL/ARAMEX, We may ship the books from Asian regions for inventory purpose. Our courier service is not available at PO BOX. Seller Inventory # abe_jan_9788171101696

Book Description PAPERBACK. Condition: New. Book Cover and ISBN may be different from US edition but contents as same US Edition. Excellent Quality, Service and customer satisfaction guaranteed! We may ship the books from Asian regions for inventory purpose. Our courier service is not available at PO BOX. Seller Inventory # abe_9788171101696

Book Description Parimal Publications, 2010. Hardcover. Condition: New. Dust Jacket Condition: New. 2nd Edition. "Agni purana occupies an important place among the most popular works in the Mahapuranas exceptionally for its scientific tracts. It is also called Agneya-Purana and is narrated by Suta (Lomaharsana), a disciple of Vyasa, who received it from Vasistha to whom it was communicated by Agni. It consists of Sixteen thousand stanzas distributed in three hundred and eighty-three chapters. The contents of this Purana clearly show that it has no sectarial leaning. It impartially treats of Vaisnava, Saiva and Sakta forms of worship. It is more a compendium of Sanskrit learning than the advocacy of any particular form of religion. The early chapters of this Purana describe the Avataras and in those of Rama and Krsna, avowedly follow the Ramayana and Mahabharata. The chapters on medicine, materia, medica and pharmacy as well as those on the treatment of elephants and horse diseases are highly interesting. Besides an exhaustive account of paravidya and the science of Brahman occurs in this Purana, it is a very interesting account and will prove highly useful to the readers. It can virtually be regarded as an Encyclopaedia of Hinduism, teaching as it does among others many subjects such as cosmogony, religion, law and much legendary matter etc. which, to a Hindu, assumes the value of history and geographical matter such as description of various places of pilgrimage. This Purana also teaches, archery, medicine, rhetoric, prosody and grammar."It is first time that this revised English translation of M.D. Dutt includes the Sanskrit text. The old usage of English version has been 1055 pp. Seller Inventory # 37674