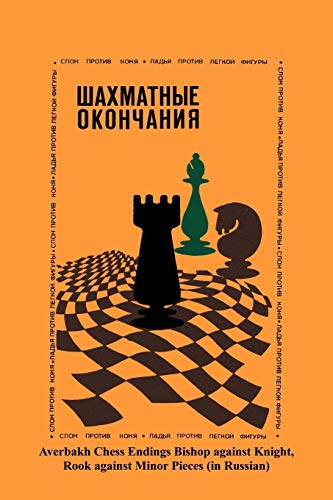 This book consists of two parts. The first is chess endgames with bishop against knight, the second - the rook against minor pieces. The book can be used as a training manual for the enactment of endings, as well as a reference in the analysis of the deferred parties. Designed for high-players.

Yuri Lvovich Averbakh is a Russian chess player and author. He was born February 8, 1922 on Kaluga, Russia. He is the oldest living chess grandmaster. Once one of the world's leading grandmasters, he played in the World Championbship Candidates tournament in Zurich 1953 and finished tenth. He wrote major works on the endgames. He edited the leading Soviet Chess Magazines and was President of the Soviet Chess Federation (1972-77). He became an International Arbiter in 1969 and an International Judge of Chess Compositions and took an active role on a number of important FIDE committees. His first major success was first place in the Moscow Championship of 1949, ahead of players such as Andor Lilienthal, Yakov Estrin and Vladimir Simagin. He became an International Grandmaster in 1952. In 1954 he won the USSR Chess Championship ahead of players including Mark Taimanov, Viktor Korchnoi, Tigran Petrosian, Efim Geller and Salo Flohr. In the 1956 Championship he came equal first with Taimanov and Boris Spassky in the main event, finishing second after the playoff. Later Averbakh's daughter, Jane, would marry Taimanov. Averbakh's other major tournament victories included Vienna 1961 and Moscow 1962. He qualified for the 1953 Candidates' Tournament (the last stage to determine the challenger to the World Chess Champion), finishing joint tenth of the fifteen participants. He also qualified for the 1958 Interzonal at Portorož, by finishing in fourth place at the 1958 USSR Championship at Riga. At Portoroz, he wound up in a tie for seventh through eleventh places, half a point short of advancing to the Candidates' Tournament.

2. Chess Rook Endings Elephant Against Horse Against a Light Figure

5. Chess Rook Endings Elephant Against Horse Against a Light Figure