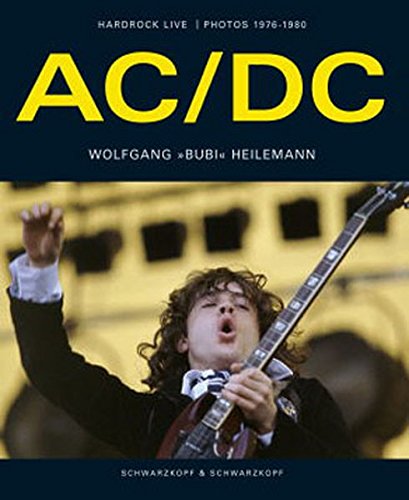 When Bubi Heilemann first saw AC/DC in a smoky club in London in 1976, it was anybody's guess that this Australian band would become one of the greatest, hardest and most successful rock bands of all times. The explosive performance of guitar virtuoso Angus Young, the dirty, Jack Daniels-soaked vibrato of singer Bon Scott and the straight-hitting hard rock at its ear-splitting volume made the club quake as if it had been hit by lightning. Heilemann booked the band on the spot and brought them to BRAVO-DISCO and to the legendary Schwabing rock club "PN", where they almost brought the walls down with their explosive sound. Heilemann helped the band through the tragic death of Bon Scott and booked them on countless world tours on the "Highway to Hell". The photos in this brilliantly illustrated volume show the hardest rock band in the world - live and uncensored. The Band: Starting out in Sydney in 1973, the modest beginnings of AC/DC as a coverband of the Rolling Stones and the Beatles did not lead anyone to suspect that this was rock history in the making.

Soon, however, the brothers Malcolm and Angus Young invited Bon Scott to sing for them - he lived the rock'n'roll lifestyle with true dedication, providing a sense of urgency so essential to their material. The successful records "High Voltage" and "TNT" as well as a number of extensive tours solidified the band's reputation. "Highway to Hell", released in 1979, secured them a steady place at the rock'n'roll hall of fame. Their trademarks: aggressive guitars, a throaty voice and fairly explicit lyrics. In 1980, Bon Scott had to pay the price for his excessive lifestyle: Completely drunk, he suffocated on his own vomit. It took his successor, Brian Johnson, a long time to be accepted by the fans. Today, AC/DC is a living legend, they release a new album every now and then and sometimes they even tour the world.