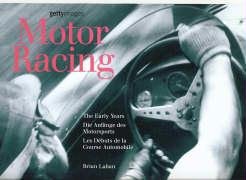 Motor sport, in its many guises, is one of the most glamorous sports in the world and one of the most widely watched, by people in virtually every country all over the globe. Motor racing has always had the capacity to create memorable stories and images. From the earliest days of motoring, car manufacturers used motor sport as a proving ground for the machines, but the sport earned an image far beyond that of a mere engineering laboratory. Even before the 20th century dawned, motor racing had a reputation as an arena where almost gladiatorial battles were set before a public only recently accustomed to seeing a motor car of any kind. As motor sport developed from the great days of the inter-city road races to closed road circuits and eventually to purpose-built tracks, it became visually one of the most sensational sports in the world. This is the story of motor racing as it once was, from the early days to the fifties; the story of those Olympians who bestrode the track - from Jenatzy and Boillot, Campbell and Caracciola, to Ascari, Fangio and Moss - and of their cars - the Alfas, Mercedes, Maseratis and Ferraris - giants all of another, more compelling age.