Items related to Electro-Optical Effects to Visualize Field and Current... 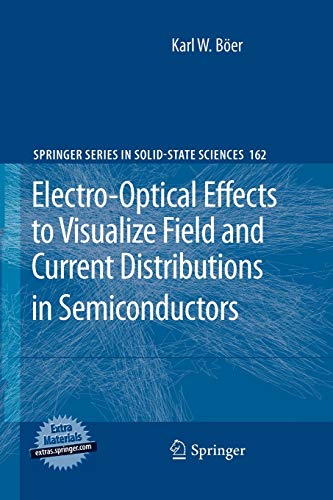 This monograph of Electro-Optical E?ects to Visualize Field- and Current- Distributions in Semiconductors consists of ?ve parts, four of which are based ontheresearchofcadmiumsul?de,wherealargenumberofcontributionswere made between 1958 and the late 1960s to directly observe ?eld and current distributionsandinterprettheirresults.Thevisualizationof?elddistributions was accomplished by using the Franz Keldysh e?ect, and the visualization of currentinhomogeneitiesusestheshiftoftheopticalabsorptionedgebyJoule's heating. The ?fth part deals with a review of the explosively developing ?eld of N- and S-shaped current voltage characteristics causing inhomogeneities and instabilities in ?eld and current distributions. This part of the book was composed by Eckehard Sch. oll of the Technical University in Berlin. A major emphasis is given to the ?rst part of the book in which s- tionary high-?eld domains are described. These domains can be used as an essential tool to determine unambiguously certain semiconductor properties, such as the electron density and its mobility as the function of the actual electric ?eld. It is also helpful to determine changes of the work function and electron a?nities between di? erent materials, such as for electrodes and h- erojunctions. Finally, it gives direct information about certain doping and their spacial pro?le.

The book describes the basic principles that relate to field and current inhomogeneities in semiconductors and their kinetics that occur in the regime of negative differential conductances of semiconductors. The book presents the related theory and experiment. It proceeds to give for the first time the experimental methods to observe directly these inhomogeneities within the semiconductor. It analyses in detail the different ranges in which such inhomogeneities occur, when they are stationary and when not and what technical and device application result.

The accompanying film on the website demonstrates all related kinetic effects. Information on these effects was previously mostly available indirectly by interpretation of current-voltage characteristics, or by point contact probing along the surface, or by changes in the luminescence spectrum. The material is based on the original papers of the research team of the author, starting in the late 50’s and updated to incl. 2008.