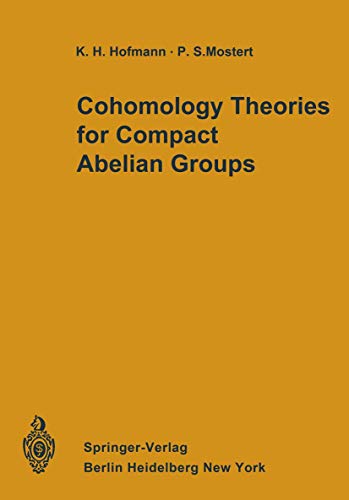 Of all topological algebraic structures compact topological groups have perhaps the richest theory since 80 many different fields contribute to their study: Analysis enters through the representation theory and harmonic analysis; differential geo­ metry, the theory of real analytic functions and the theory of differential equations come into the play via Lie group theory; point set topology is used in describing the local geometric structure of compact groups via limit spaces; global topology and the theory of manifolds again playa role through Lie group theory; and, of course, algebra enters through the cohomology and homology theory. A particularly well understood subclass of compact groups is the class of com­ pact abelian groups. An added element of elegance is the duality theory, which states that the category of compact abelian groups is completely equivalent to the category of (discrete) abelian groups with all arrows reversed. This allows for a virtually complete algebraisation of any question concerning compact abelian groups. The subclass of compact abelian groups is not so special within the category of compact. groups as it may seem at first glance. As is very well known, the local geometric structure of a compact group may be extremely complicated, but all local complication happens to be "abelian". Indeed, via the duality theory, the complication in compact connected groups is faithfully reflected in the theory of torsion free discrete abelian groups whose notorious complexity has resisted all efforts of complete classification in ranks greater than two.

Book Description Springer-Verlag, New York, 1973. Hardcover. Condition: Good. Dust Jacket Condition: No Dust Jacket. An ex-library copy in tan cloth lettered in black. The usual ex-libris markings, clean within. The binding is sound and there is little wear to the covers. Seller Inventory # 040737