Items related to The Cerebellum as a Neuronal Machine

Eccles, John C. The Cerebellum as a Neuronal Machine

The Cerebellum as a Neuronal Machine 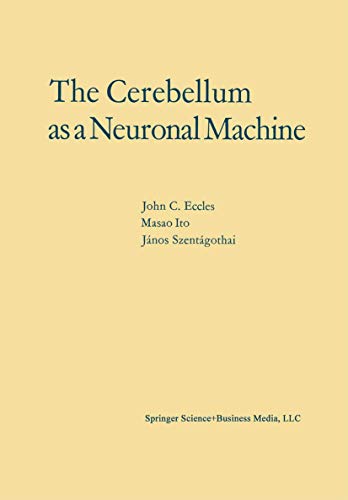 This book has had a three-fold origin, corresponding to the discoveries made by the three authors and their collaborators during the last few years - mostly since 1962. A most fruitful symposium on the cerebellum was held in Tokyo at the time of the International Physiological Congress in September 1965, and there was then formulated the project of writing this book so as to organize all this new knowledge and make it readily available, and to give opportunity for the con­ ceptual developments that may be seen in Chapters XI, XII and XV in particular. The present account of the physiological properties of the cerebellar cortex is based to a large extent on systematic investigations that were concerned with discovering the mode of operation of the constituent neuronal elements of the cerebellar cortex. This work was carried out in the Physiology Department of the Australian National University from 1963 to 1966 in collaboration with several visiting scientists - initially Drs. ANDERSEN, OscARssaN and VooRHOEVE and later Drs. LuNAs, SAsAKI and STRATA - to all of whom grateful thanks are extended for a great many of the figures, and even more significantly for the original and critical contributions that they made to so many aspects of this exploration into the mode of operation of the neural machinery of the cerebellar cortex.

1. The Cerebellum as a Neuronal Machine