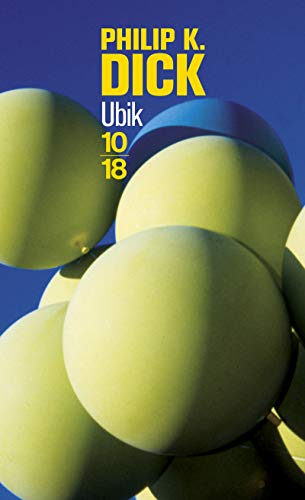 Nobody but Philip K Dick could so successfully combine SF comedy with the unease of reality gone wrong, shifting underfoot like quicksand. Besides grisly ideas like funeral parlours where you swap gossip for the advice of the frozen dead, Ubik (1969) offers such deadpan farce as a moneyless character's attack on the robot apartment door that demands a five-cent toll:

"I'll sue you," the door said as the first screw fell out.

Joe Chip said, "I've never been sued by a door. But I guess I can live through it."

Chip works for Glen Runciter's anti-psi security agency, which hires out its talents to block telepathic snooping and paranormal dirty tricks. When its special team tackles a big job on the Moon, something goes badly wrong. Runciter is killed, it seems--but messages from him now appear on toilet walls, traffic tickets or product labels. Meanwhile fragments of reality are time-slipping into past versions: Joe Chip's beloved stereo system reverts to a hand-cranked 78 player with bamboo needles. Why does Runciter's face appear on US coins? Why the repeated ads for a hard-to-find universal panacea called Ubik ("safe when taken as directed")?

The true, chilling state of affairs slowly becomes clear, though the villain isn't who Joe Chip thinks. And this is Dick country, where final truths are never quite final and--with the help of Ubik--the reality/illusion balance can still be tilted the other way...Another nifty choice from Millennium SF Masterworks. --David Langford

‘The best sci-fi mind on any planet’
Rolling Stone