Items related to THE ODYSSEY OF HOMER (Greek Classics)

THE ODYSSEY OF HOMER (Greek Classics) 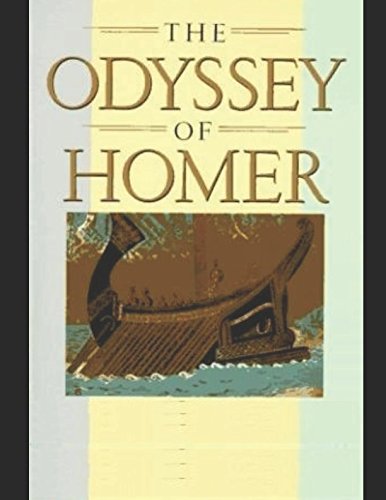 The Odyssey of Homer is a Greek epic poem that tells of the return journey of Odysseus to the island of Ithaca from the war at Troy, which Homer addressed in The Iliad. In the Greek tradition, the war lasted for ten years. Odysseus then spent a further ten years getting home in the face of hostility from Poseidon, god of the earth and sea. Odysseus’s return to his island, however, is not the end of his woes. He finds that 108 young men from the local vicinity have invaded his house to put pressure on his wife Penelope to marry one of them. A stalemate exists, and it is only resolved by a bow contest at the end of the poem, which then leads to a slaughter of all the suitors by Odysseus and his son Telemachus. Peace on the island is eventually restored through the intervention of Athena, goddess of wisdom, victory and war. The quest of Odysseus to get back to his island and eject the suitors is built on the power of his love for home and family. This notion of love conquering fear and hatred is a common theme in Greek quest mythology. The Odyssey, like the Iliad, is divided into 24 books, corresponding to the 24 letters in the Greek alphabet. Within the middle section of the poem (Books 9-12), Odysseus describes all the challenges that he has faced trying to get home. These include monsters of various sorts, a visit to the afterlife, cannibals, drugs, alluring women, and the hostility of Poseidon himself. These challenges resemble those of earlier heroes like Heracles and Jason. In the Iliad, the hero Achilles faces no such challenges, indicating that the Odyssey has a very different idea of heroism.

1. THE ODYSSEY OF HOMER (Greek Classics)