Items related to Lifesaving Labradors: Stories from Families with Diabetic... 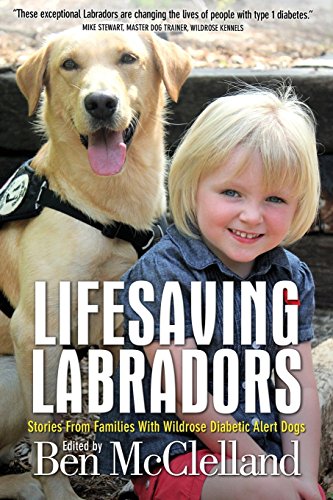 "Diabetes is hell!" says Capri Smith, struggling with the debilitating disease that struck her daughter Ciara at age nine. Angie Simonton felt that a monster attacked her family when Lily succumbed before she was two years old. An equestrian in college, Devon Wright feared stigma and tried to shield her disease from public view. Animal EMT Megan DeHaven and Manhattan businessman Tom Arsenault worried that they would die in their sleep. Tom came to know borough EMTs by name, because he blacked out so frequently. Sharon Stinson, married and in her twenties, thought she would die like Shelby in Steel Magnolias. Sweet Ciara, little Lily, and the rest of the people in this book are all type 1 diabetics. Like three million other Americans they suffer from an incurable autoimmune disease that destroys the insulin-producing beta cells in the pancreas. Sugar rides a rollercoaster in each diabetic's blood stream, sending the body into a catastrophic state. Death casts its shadow over each of them. Desperate, each one sought a diabetic alert dog from Wildrose Kennels. Known as DADs, these British Labradors use their keen sense of smell to notify the diabetic or the caregiver of low and high blood sugar levels, thereby allowing prompt corrections to avert the episode or lessen its severity. Their diabetic owners attest that their dogs save their lives-daily. Lifesaving Labradors explains how the dogs do it, and how they are used to change and save lives.

"These exceptional Labradors are changing the lives of people with type 1 diabetes." Mike Stewart, Master Dog Trainer, Wildrose Kennels "Lassie and Rin Tin Tin have nothing on these lifesaving Labradors. The heroes featured in Ben McClelland's work not only save lives - routinely - but they also free families from the nightmare of type 1 diabetes. Lifesaving Labradors illuminates the miraculous bond between human and dog." -Neil White, author of In the Sanctuary of Outcasts

In addition to articles and editions, Ben McClelland has written two professional books and a nonfiction memoir, Soldier's Son, which was published by the University Press of Mississippi in March 2004, as a Willie Morris Book in Memoir and Biography. McClelland is a Professor and Schillig Chair of English at the University of Mississippi, where he has taught courses in literature and writing for twenty-six years. He holds a Ph.D. in American Literature from Indiana University, where he wrote a dissertation on William Faulkner's fiction. A duck hunter with his own gundog, McClelland is resident writer and apprentice trainer at Wildrose.

Book Description PAPERBACK. Condition: New. Book Cover and ISBN may be different from US edition but contents as same US Edition. Excellent Quality,Quick delivery, We may ship the books from Asian regions for inventory purpose. Our courier service is not available at PO BOX. Seller Inventory # nt_9781938467905