Mayer, Bernadette; Browne, Laynie The Desires of Mothers to Please Others in Letters

The Desires of Mothers to Please Others in Letters 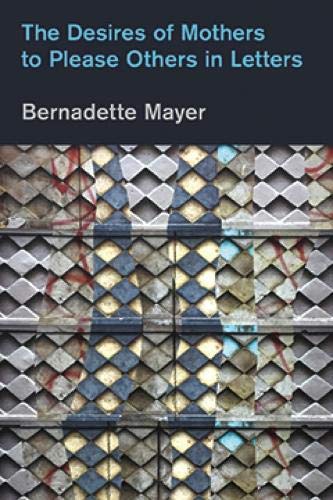 Endlessly inclusive, The Desires of Mothers to Please Others in Letters, first published in 1994 and long out of print, evokes the complexity of real persons as it simultaneously reinvents multiple genres: epistle, prose poem, and memoir. Written between 1979 and 1980 while pregnant with her third child, Mayer extends her imaginative letters into meditations for us all on life as it is lived in real time, with its responsibilities and manifold desires. Fierce, lyrical, intimate, and wise, both new and familiar readers, both mothers and non-mothers, will find this book beckoning again and again to offer delicious writing, timely information, consolation, and advice."

"Bernadettes Mayer's Poetry is untamed, word-loving, thought-bending, scientific, able-bodied, funny, generous, honest, and fearless. She is also a supreme formalist, especially when her poems are at their most playful and unpredictable. That is, she possesses a unique and an exemplary grammar of loving. Mayer has delivered a libertine vision of the last most free site--the home world. And it's deep, filled with everyday life, children, landlords, laundry, bills, food, dollar stores, and lovers. Sometimes when I am reading Bernadette Mayer's work I can't tell if she has a broken heart in a fierce world or a fierce heart in a broken world. I suspect it is the latter. The Desires of Mothers to Please Others in Letters is a masterwork."--Peter Gizzi "Publishers Weekly"

"Bernadette Mayer's influential epistolary invention was written during a period of emergent, unbounded feminist literary experimentation and in the context of a vital New York School and East Coast poetic community. The republican of these adventurous, audacious, time-based, culturally critical, and sociable writings reawakens a sense of what's possible in poetry, between the freedom of improvisation and the predetermination of constraint. Mayer's invocation of the philosophical question of the other as an indeterminate aspect of the actuality and concept of mother is particularly compelling to this reader as is her durational attempt to get at about the bearing of children before they are born. This desire writing however is also, if not foremost, an event of sentences. Mayer's sentences stretch, heap, languish in densities, launch into anecdote, adjust a perspective, represent realities, compel judgment, rush past the stop, encourage self-awareness, and offer themselves to the pleasure of others."--Carla Harryman "Publishers Weekly"

"This new publication restores to print a vital text from Mayer a powerful treatise about balancing identities and conceiving both children and works of art. The long collection, originally published in 1994, assembles unsent letters drafted between summer 1979 and February 1980, during Mayer's third pregnancy--apostrophes to the living and the dead that are openly preoccupied with this new birth. Pregnancy contemplation swells to surround topics of femininity, female bodies, and what it means to be both mother and poet...Stylistically, the work holds true to Mayer's unmistakable voice, ringing with a musicality that arises through her irregular prose grammar. These forms are a foil to much of this work; the normality of pregnancy and the ordinariness of domestic life--"We have a house and it has nine rooms!"--become meaningfully heightened by Mayer's delivery of such personally specific lines. Poetry or prose, epistles or pregnancy guide; from any perspective, Mayer's rediscovered work delivers the goods."-- "Publishers Weekly"

"What if we could write poetry at the very same moment we live our lives? What if we could use imagination and language to speak all sides of our mind to all of the others who we love? What if we could invent a form that is at once poetry and prose, at once direct communication and also vast and complex self-portrait of integrated imaginary, intellectual, and emotional experience? Bernadette Mayer has generously done that for us in her astounding book The Desires of Mothers to Please Others in Letters in a way that enables us to think of everything anew. She writes a letter to the world who always writes to her all at once and one person at a time and that person is you."--Lee Ann Brown "Publishers Weekly"

BERNADETTE MAYER was born in Brooklyn, New York, in 1945. A prolific poet, her first book was published when she was twenty-three years old. Now, many texts later, she continues to write progressive poetry from her home in East Nassau, New York.

1. The Desires Of Mothers To Please Others In Letters

2. The Desires of Mothers to Please Others in Letters

3. Desires Mothers to Please Others in Letters

4. The Desires of Mothers to Please Others in Letters