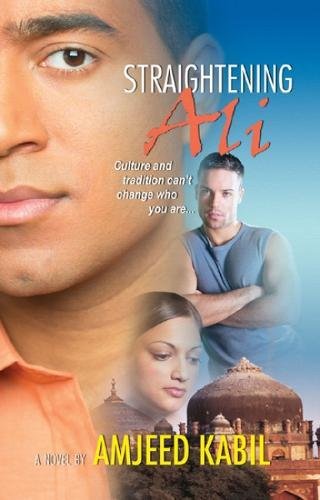 For Ali Mirza, a young British born Pakistani man, life takes
a sudden dramatic turn when his family arranges for him to get married even
though he has told them he is gay. How will he survive his wedding night
when he's not even turned on by his new bride, whom he has only met once
and for five minutes? Sajda, his wife, claims she is in love with him, but
she does not even know him. For Ali, this is the tip of the iceberg as his
boyfriend has moved to France and is hesitant to support Ali. What is Ali
to do? Should he run away to join the love of his life, or should he stay
and live the life that has been arranged for him by his family? If he does
run, will they find him and force him to be straight? Will he ever reunite
with his lover? Ali must decide what is best for him and does in a matter
of days in STRAIGHTENING ALI.

STRAIGHTENING ALI is a riveting story (set in Birmingham and Leicester),
about family ties, conflicting cultures and the basic dynamics of human
relationships set , STRAIGHTENING ALI opens one's eyes to a world we know
little about.

Amjeed Kabil was born in the West Midlands, England in 1972 and
currently lives in the Midlands. He has worked for several years in the
Social Housing field, which has included working with young, vulnerable
homeless people. This has given him ideas for several books. Amjeed Kabil
is currently working on his second novel.