Items related to A Thorn in My Pocket: Temple Grandin's Mother Tells...

A Thorn in My Pocket: Temple Grandin's Mother Tells the Family Story 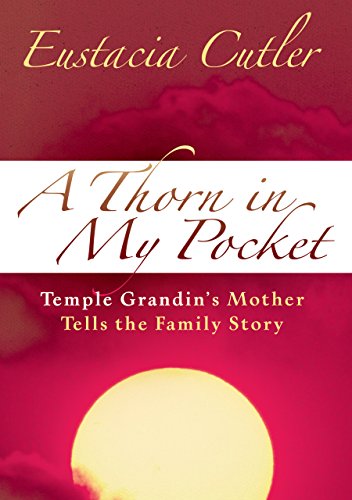 A Thorn in My Pocket is Eustacia Cutler's story of raising her daughter, Temple Grandin, in the conservative ""Leave-it-to-Beaver"" world of the fifties, a time when children with autism were routinely diagnosed as 'infant schizophrenics' and banished to institutions. She tells of her fight to keep Temple in the mainstream of family, community and school life, how Temple responded and went on to succeed, as Ms. Cutler puts it, 'beyond my wildest dreams'. Ms. Cutler also explores the nature of the autism disorder as doctors understand it today, and how its predominant characteristics reflect our own traits in an exaggerated form.

'I have known Temple Grandin for over 20 years. I have seen her grow ever more strong and independent. I've been amazed at her intelligence, her accomplishments and her determination to live the best life she can, both personally and professionally, while helping others. I've often thought, I sure wish I could talk with Temple's mom."" I wanted to know what she did, what others did, how was Temple when she was little, to what did she attribute Temple's remarkable accomplishments. One thing I knew for sure, as fellow parent, was that Eustacia probably had an important part in Temple's great strides. This book was almost as good as meeting Eustacia in person. She very honestly gives us a background of her family from the time she met her husband through their marriage, child rearing and beyond. I had no idea that her husband has traits of the spectrum. I had no idea that she had endowed divorce and that she had to fight to keep Temple institutionalized. What a remarkable story of courage, a desire to keep her own individuality (something many parents lose along the way), and a belief in Temple...her daughter...a talented child who became a accomplished woman. I am a relatively slow reader. I began reading A Thorn in My Pocket on a Friday. I was finished that Monday. I just couldn't put it down. This book is a stand-out because it is very honest and REAL. Eustacia certainly doesn't try to look like a martyr. She just tells it like she lived it. BRAVO!' - The Maap, Vol 3, 2005

In "A Thorn in My Pocket", Eustacia Cutler shares the challenges and rewards of raising her autistic daughter, Temple Grandin, in 1950s small town America. The author tells of how, despite the misdiagnosis of "infant schizophrenia," she battled to keep Temple in the mainstream of family, community, and school life. She writes honestly and openly about the strains placed upon family life and the emotional rewards that Temple's success gave her; succeeding, as she puts it, "beyond my wildest dreams." As well as a personal biography, this book also serves as a history of the perception and treatment of autism from the 1950s to the present day. In the book's final chapters, Eustacia discusses Temple's current success, her own participation in Temple's lectures about Autism Spectrum Conditions, and her conversations with professionals about current ASD theories and treatments. A great read, this book will also prove to be a great source of support to people with autism their families and carers.

1. A Thorn in My Pocket: Temple Grandin's Mother Tells the Family Story

2. A Thorn in My Pocket: Temple Grandin's Mother Tells the Family Story

4. A Thorn in My Pocket: Temple Grandin's Mother Tells the Family Story