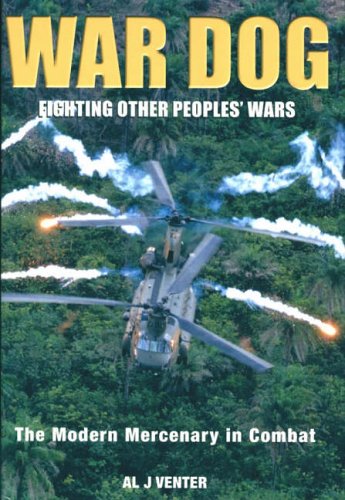 War Dog deals with mercenary action in a score of wars: Angola, Sierra Leone, El Salvador, the Congo Republic, Ethiopia, Lebanon and others. One of a handful of correspondents that saw action with the South African 'guns for hire' group Executive Outcomes, Al Venter's revelations about this organisation as well as what has recently been taking place in the Democratic Republic of Congo are remarkable. So are many of the 150 photos in this volume. In this book you get up close and personal with hardened pro's on the ground, joining them for missions where quick thinking and a will of steel are the only things separating them from success or failure, life or death. While the major world powers such as the USA and leading European nations grapple with more serious global issues, mercenaries might very well increasingly be the answer for dealing with some of the brush fire wars that continue to plague the developing world. In this book, the author sets out a plausible evidence for such a trend and one that is likely to become more commonplace in the future. Al J. Venter has made a career of covering other peoples' conflicts. As a long serving Africa and Middle East correspondent for Jane's International Defense Review his reports over the past thirty years have spanned four continents. Twice wounded and now well into his sixties, he recently flew combat in Sierra Leone alongside Neall Ellis in an aging Russian Mi-24 gunship (that leaked when it rained) and he still tries to go on operations when the opportunity presents itself. Of late, he has been spending a lot of time in West Africa.

"A disturbing insight into the ever growing world of unconventional private armies. Like it or not, Venter tells it to us the way it is."--John Le Carre "In this work Al Venter has delved into the real-life exploits of the War Dogs... to illuminate how the privateers have continued to conduct battle in the wake of the Colonial Age. The true stories in this work are more impressive than fiction, and in terms of Africa, this book should be on the must read list for the U.S. State Department and British Foreign Office."--Frederick Forsyth "...a remarkable read with thriller moments that take you deep into the action"--RAIDER "..paints a journalistic profile of the modern mercenary. The author traveled to Sierra Leone, Bosnia, Lebanon, the Congo, Angola, and elsewhere in order to give the reader insight into who takes on the role of the mercenary in contemporary times and their role in the world's conflicts."--Book News, Inc. "...a gripping and hugely informative read. ...highly recommended. ...impressive and enlightening."--The Herald (HMGS)