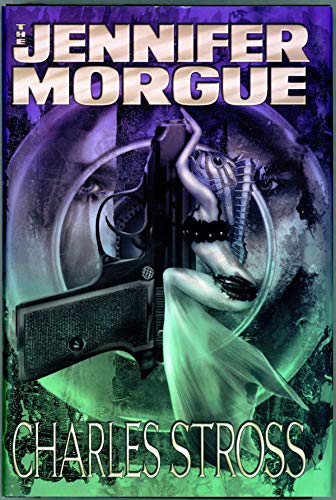 Bob Howard?a T-shirt?wearing computer geek and field agent for the super-secret British government agency The Laundry?must save the world from eldritch horrors, codenamed Jennifer Morgue, in this fast-paced spy thriller. Bob's current mission is to stop the evil Ellis Billington from achieving world domination, but he must overcome obstacles including the Gravedust device, which permits communication with the dead; destiny-entanglement protocol; banishment weapons; and Ramona Random, a lethal but beautiful agent for the U.S. counterpart to The Laundry. Billington plans to raise the eldritch horror Jennifer Morgue from the vasty deeps, and communicate with a dead warrior for the purpose of ruling the world. Blending physics and applied mathematics with the practice of summoning and demonology, this spy-meets-horror novel will keep sci-fi fans on the edge of their seats. This volume also includes a bonus story, "Pimpf," featuring agent Bob Howard in the world of virtual gaming, as well as an afterword entitled "The Golden Age of Spying."

Brilliantly disturbing and funny at the same time (Ben Aaronovitch, author of RIVERS OF LONDON)

Charles Stross owns this field, and his vast, cool intellect has launched yet another mad, sly entertainment that will strangle the hell out of anything else on offer right now (Warren Ellis, author of Transmetropolitan)

Stross at the top of his game - which is to say, few do it better (KIRKUS)

The second volume in The Laundry Files - a series that combines spy fiction with the supernatural, where George Smiley and MI6 meet Lovecraft and Harry Dresden.

Book Description Hardcover. Condition: New. Quality Books. Because We Care - Shipped from Canada. Usually ships within 1-2 business days. If you buy this book from us, we will donate a book to a local school. We donate 10,000+ books to local schools every year. If there are any problems, pleases ask us to resolve it amicably before leaving any feedback. Seller Inventory # R25781S