Items related to Destined for War: can America and China escape Thucydides&#x...

Destined for War: can America and China escape Thucydides’ Trap? 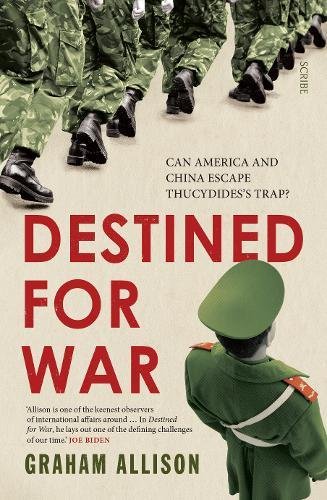 China and the United States are heading toward a war neither wants. The reason, argues Harvard scholar Graham Allison in this razor-sharp analysis, is Thucydides's Trap. This phenomenon, as old as history itself, is named for the Greek historian's assessment of why the Peloponnesian War broke out: a rising power threatened to displace a ruling one., Over the past 500 years, such a struggle has occurred between major powers just sixteen times. In twelve cases, it resulted in war. Today, as an unstoppable China approaches an immovable America, and both Xi Jinping and Donald Trump promise to make their countries 'great again', the seventeenth case looks grim., Unless China scales back its ambitions or the US accepts becoming number two in the Pacific, a trade conflict, cyber attack, or accident at sea could soon escalate. Through uncanny historical parallels, Destined for War shows how close we are to the unthinkable. Yet, stressing that war is not inevitable, Allison also reveals how clashing powers have kept the peace in the past - and what painful steps the US and China can and must take to avoid disaster.

Graham Allison is one of the keenest observers of international affairs around. He consistently brings his deep understanding of history's currents to today s most difficult challenges and makes our toughest foreign policy dilemmas accessible to experts and everyday citizens alike. That's why I regularly sought his counsel both as a senator and as vice president. In Destined for War, Allison lays out one of the defining challenges of our time managing the critical relationship between China and the United States. --Joe Biden, former Vice President of the United States

Thucydides's Trap identifies a cardinal challenge to world order: the impact of a rising power on a ruling power. I read the book with great interest. I can only hope that the US-China relationship becomes the fifth case to resolve itself peacefully, rather than the 13th to result in war. --Henry Kissinger, former United States Secretary of State

Do China and America want war? No. Might they be compelled into conflict by severe structural stress? Yes. Thankfully, Allison charts an essential course to avoid a catastrophic collision. Destined for War will be studied and debated for decades. --Kevin Rudd, former Prime Minister of Australia

Graham Allison is director of Harvard University's Belfer Center for Science and International Affairs and the best-selling author of Lee Kuan Yew, Nuclear Terrorism, and Essence of Decision. Founding dean of the Kennedy School of Government, he has advised the secretaries of defense under Reagan, Clinton, and Obama.

2. Destined for War: can America and China escape Thucydides's Trap?