Items related to The Golden Bees: The Story of the Bonapartes

Aronson, Theo The Golden Bees: The Story of the Bonapartes

The Golden Bees: The Story of the Bonapartes 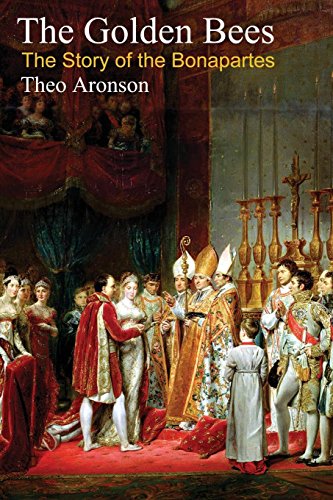 Napoleon III, being accused on one occasion of having nothing of the Great Napoleon about him, replied with as much exasperation as wit, that he did, on the contrary, have his relations.

This book is a domestic chronicle of the incredible Bonaparte family, a greedy, amorous, quarrelsome and hot-blooded Corsican clan who provided nineteenth-century Europe — and America — not only with two French emperors, but also with a dazzling assortment of pretenders and parvenus, statesmen and eccentrics, great ladies and adventuresses.

Plumped on to the thrones of Europe by the career of Napoleon I, who probably took better care of his family than any conqueror in history, the Bonapartes survived the wreck of the two empires they ruled, buzzing around the honeypots of the continent with all the persistence of the imperial bees of Napoleon's crest.

This is a personal history, not a political one. It is the family, with its eccentricities, vulgarities and fascinations manifesting themselves in generation after generation, which holds the centre of the stage. The great political, economic and military events of the time are heard dimly as 'noises off'. Napoleon I himself appears as son, brother, husband, father and above all as founder of a dynasty, rather than as a great public figure.

But about the family, its feuds, its treacheries, its love affairs, its moments of greatness and of human tragedy, Mr Aronson seems to have missed not one good story, from the squabbles of Napoleon's rebellious sisters over the carrying of Josephine's train, to Hitler's remarkable deal with Petain for the return of the body of the Duke of Reichstadt to his father's tomb in the Invalides.

Mr Aronson paints his family portrait with a wealth of detail based on many years of research with historical documents and original records, letters, memoirs and family diaries — for, in the end, no one seems to have been able to tell quite such a lurid tale about a Bonaparte as another Bonaparte.

Theo Aronson is the author of over twenty works of royal historical biography, published in eleven languages. Among the widely read are Grandmama of Europe, The King in Love, Napoleon and Josephine and a biography of Princess Margaret. In the course of researching and writing these books he has interviewed major and minor members of Britain’s royal family and members of the royal households, as well as various officials, servants, friends and others whose lives are in some way connected with the monarchy.

The Golden Bees: The Story of the Bonapartes