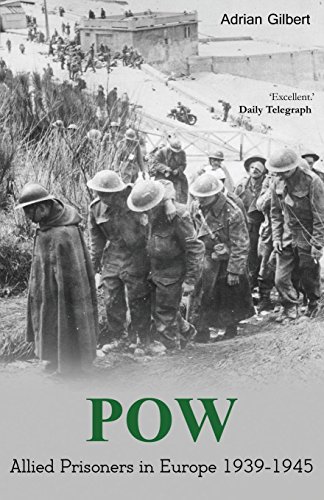 ‘Gilbert is to be congratulated; with verve and scholarship he has illuminated a murky area of the Second World War.... Excellent.’
- Ian Thomson, The Daily Telegraph

‘A big subject given a comprehensive and worthwhile examination.’
- Peter Lewis, The Daily Mail (Critics’ Choice)

‘One of the most compelling untold stories of the Second World War.’
- Soldier Magazine

‘An excellent new account of the POW experience.’
- The Good Book Guide

Just under 300,000 Allied servicemen from Britain, the Commonwealth and the United States were captured in Europe and North Africa between 1939 and 1945. Using a wealth of new sources and archival material, POW describes their experiences in both German and Italian prisoner-of-war camps.

Prisoners’ daily lives are vividly rendered: the workings of the prison-camp system; the distinctions of rank, service nationality and race; the ways in which prisoners maintained contact with the outside world; artistic and intellectual endeavours; and an acknowledgment of the dark undercurrents of corruption and collusion with the enemy.

Everyday life is offset by high drama: the secret organizations that smuggled aid into the camps, the prisoners’ daring escape plots, sabotage plans and other resistance activities.

Adrian Gilbert brings to the fore the often forgotten voices of the prisoners to provide a compelling window on to a crucial aspect of the Second World War.

'It is a big subject, here given a comprehensive and worthwhile examination' (Peter Lewis, Daily Mail)

'POW tells a story that was in danger of being forgotten. Spellbinding, and overdue' (Peter Weston, Western Daily Press)

'Excellent ... A valuable record ... Gilbert is to be congratulated; with verve and scholarship he has illuminated a murky area of the Second World War, and evoked both pity and, occasionally, grim comedy' (Ian Thomson, Daily Telegraph)

'POW sheds new light on a unique group of men from all walks of life facing collective hardships, and highlights some of the extraordinary stories of come out of captivity' (Soldier)

P.O.W. resurrects the voices of the forgotten heroes of the Second World War