Items related to The Hidden Perspective: The Military Conversations...

David Owen The Hidden Perspective: The Military Conversations of 1906-1914

The Hidden Perspective: The Military Conversations of 1906-1914 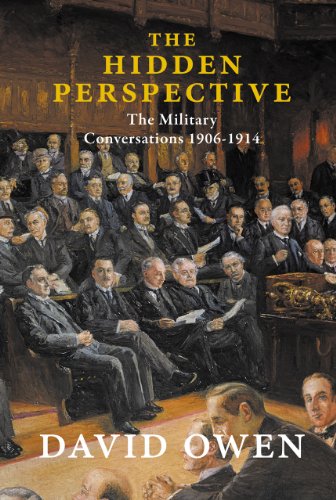 Within weeks of taking office in December 1905, British Prime Minister Henry Campbell-Bannerman and his Foreign Minister Edward Grey agreed to allow the General Staff to enter detailed talks with their French counterparts about sending an expeditionary force to France in the event of a German attack. Neither the Cabinet or Parliament were informed. Grey did not even inform Asquith, Campbell-Bannerman's successor as Prime Minister, until 1911, three years after he had assumed office. In the autumn of that year there were two stormy Cabinet meetings during which the details of the military conversations were at last revealed. The following spring Viscount Haldane, the Secretary for War, failed to slow Germany's rapid naval expansion on a mission to Berlin, despite Harcourt, the Colonial Secretary, advocating a land deal for Germany in Africa as an incentive. Recent historical evidence has shown that by July 1914, under pressure to compromise with Germany from Harcourt and Haldane, Grey had relented and a further attempt to negotiate was underway when the war started. All this time there was a hidden perspective of key diplomats alongside Grey Foreign Office. Together - and in some ways prescient of the build-up to the Iraq conflict in 2003 - they contributed to a feeling that there was a moral commitment to send troops to the continent. The Hidden Perspective shows how the 'mind frame' in the Foreign Office influenced political decision making and sentiment. Lord Owen's conclusion as a former Foreign Secretary, analysing the diplomacy and naval strategy, are that better handled at various stages over those eight years the carnage of the First World War was not inevitable and could even have been prevented altogether.

'The history of the First World War has been exhaustively studied in relation to events of the fateful structure of the alliances. The area in between, the impact of the tactical management of diplomacy on the inevitability of war, has received inadequate attention. David Owen has filled that gap. He explains in lucid detail how Britain s abandonment of its splendid isolation in favor of entente with France and an understanding with Russia deprived the international system of any flexibility. Britain, heretofore the balancer of the balance of power, transformed itself into a direct participant in the power politics of the Continent. This decision, taken essentially in secret by military staffs, was all the more fateful because it induced rigidity in two ways. In their strategic planning, France and Russia counted on British support; Germany half-convinced itself of British neutrality. In every previous conflict, the consciousness that Britain might intervene on either side had inspired caution in both. Now, Britain weakened its capacity to induce restraint by being taken for granted by one side even as the other discounted its deterrence. David Owen s book should be essential reading for contemporary statesmen; it is a story of how overreaction to immediate problems can lead to eventual disaster.' --Henry Kissinger

'Countless new books and articles are analysing the origins of the War and the military convulsions that followed. David Owen makes a powerful contribution in his new book, 'The Hidden Perspective: The Military Conversations of 1906-1914'. He looks through the keen operational eye of a former Foreign Secretary at the high-level manoeuvrings of London and other European capitals ... [arguing] that they took on a life and logic of their own, discouraging other political and military options that might have been far more effective - and far more wise. Readers of Diplomat will enjoy - and be startled by - many details Lord Owen gives us about diplomacy as practised a century and more ago.' --Charles Crawford, Diplomat Magazine

David Owen (Lord Owen) trained and practised as a medical doctor before being elected a Labour MP in his home city of Plymouth. He served as Foreign Secretary under James Callaghan from 1977 until 1979. He co-founded and went on to lead the Social Democratic Party (SDP), and is now a Crossbencher in the Lords. Among many books, he is the author of In Sickness and In Power - Illness in Heads of Government during the last 100 years, The Hubris Syndrome, Balkan Odyssey, and the autobiography Time to Declare.