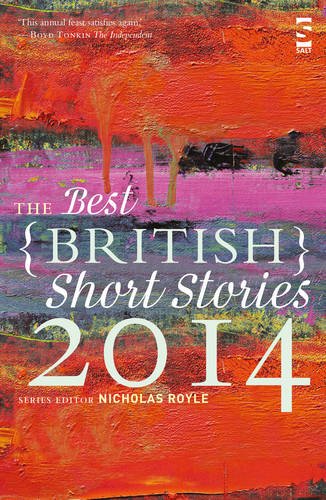 ‘There is no more carefully chosen yet eclectic anthology series in existence in Britain today’ – Susan Haigh, The Short Review

Best British Short Stories invites you to judge a book by its cover – or more accurately, by its title. This new series aims to reprint the best short stories published in the previous calendar year by British writers, whether based in the UK or elsewhere. The editor’s brief is wide ranging, covering anthologies, collections, magazines, newspapers and web sites, looking for the best of the bunch to reprint all in one volume.

Slip this lightweight but nourishing anthology into your holiday bag. Editor Royle has selected 20 published stories from British writers. His own (excellent) taste means that little explosions of weirdness or transcendence often erupt amid much well-observed everyday life.

It's so good that it's hard to believe that there was no equivalent during the 17 years since Giles Gordon and David Hughes's Best English Short Stories ceased publication in 1994. The first selection makes a very good beginning ... Highly Recommended.

There is no more carefully chosen yet eclectic anthology series in existence in Britain today, and, what’s more, I would advise anyone embarking on this year’s stories to first cast an eye over Royle’s fascinating introduction, in which he explains as much about the stories he didn’t choose, but which almost made it into the anthology, as he does about the stories he does include.

Author: Susan Haigh Source: The Short Review About the Author:

Nicholas Royle was born in Manchester in 1963. He is the author of seven novels, including: Counterparts, Saxophone Dreams, and First Novel, and a short story collection, Mortality. He has edited sixteen anthologies, including A Book of Two Halves and Neonlit: Time Out Book of New Writing. He lives between London and Manchester and teaches creative writing at MMU.

Elizabeth Baines was born in South Wales and lives in Manchester. She has been a teacher and is an occasional actor as well as the prize-winning author of plays for radio and stage, and of two novels, The Birth Machine and Body Cuts. Her award-winning short stories have been published widely in magazines and anthologies. Her first story collection, Balancing on the Edge of the World, was published by Salt in 2007. A novel, Too Many Magpies, will come from Salt in November 2009.

David Constantine, born 1944 in Salford, has published several volumes of poetry, a novel and four collections of short stories – Back at the Spike (1994), Under the Dam (2005), The Shieling (2009) and Tea at the Midland (2012). He is an editor and translator of Hölderlin, Goethe, Kleist and Brecht. He was the winner of the 2010 BBC National Short Story Award and the 2013 Frank O’Connor Award.

Ailsa Cox, Reader in creative writing and English at Edge Hill University, is a writer and critic with a special interest in the short story. She is the the author of Writing Short Stories (Routledge), Alice Munro (Northcote House) and The Real Louise and Other Stories (Headland).

Siân Melangell Dafydd is the author of Y Trydydd Peth (The Third Thing), which won the 2009 National Eisteddfod Literature Medal. She is the co-editor of the literature review Taliesin and www.yneuadd.com and writes in both Welsh and English.