Items related to Handbook of Non-Motor Symptoms in Parkinson's Disease 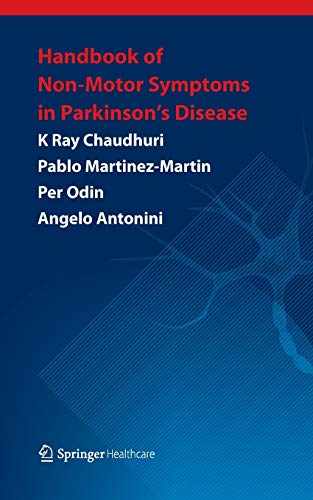 "Handbook of Non-Motor Symptoms in Parkinson's Disease" is designed to provide practical tips and emphasize key priorities for treatment of non-motor aspects of the disorder. The quick-reference handbook format, with key points highlighted by the use of figures and tables, will provide the reader with high-value practical information.

Full of authoritative guidance for practicing physicians, and written by renowned neurologists, this handbook makes the authors’ vast diagnostic experience an accessible resource, while its many figures and tables help convey the subject’s complexities.

The non-motor symptoms (NMSs) of Parkinson s disease (PD) remain an under-recognized and, consequently, under-treated set of symptoms. There is a wide variety of NMSs, ranging from neuropsychiatric and autonomic dysfunction to sleep disturbance and other symptoms. Some NMSs can be related to dopaminergic treatment, such as dopamine dysregulation syndrome, drug-induced hallucinations or psychosis, and postural hypotension, whereas fluctuations in motor responses may also have major non-motorcomponents the so-called non-motor fluctuation. In general, NMSs correlate with advancing disease, but some NMSs, such as rapid eye movement (REM) behavior disorder (RBD) and olfactory deficit, precede the onset of motor symptoms by a number of years. The pattern of various NMSs is, therefore, variable throughout the course of the disease. Awareness of MNSs is integral to modern holistic care for PD, as some are potentially treatable and can enable significant improvements to health-related quality of life (HRQoL) of PD patients.