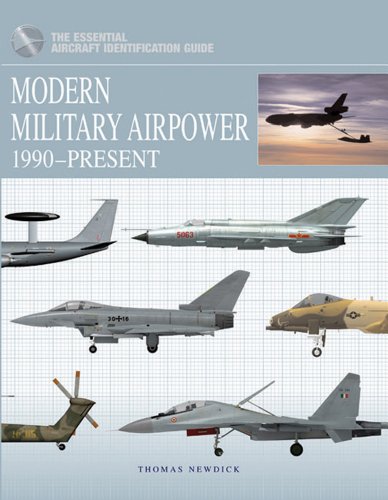 Illustrated with detailed artworks of modern military aircraft and their markings with exhaustive captions and specifications, The Essential Aircraft Identification Guide: Modern Military Airpower 1990 Present is an extensively researched review of the equipment and organization of the world s air forces and their deployment in recent conflicts in Iraq, Afghanistan and elsewhere. Organized by country, branch of the armed forces, and squadron, this book details the responsibilities of each and describes the models of aircraft in service with each unit along with their individual and squadron markings. Including support and reconnaissance aircraft as well as front-line fighters, and illustrated with more than 200 specially commissioned and up-to-date artworks, The Essential Aircraft Identification Guide: Modern Military Airpower 1990 Present is an essential reference guide for modelers and any enthusiast with an interest in modern military aircraft.REVIEWS The information provided and the convenient layout of this book makes it both useful and easy to use. IPMS, 01/2011"

This is a well-produced and attractive volume --Combat Aircraft Monthly, January 2011

An aviation and defence writer and editor, Thomas Newdick is based in Germany, from where he has researched and written numerous articles for various specialist magazines and journals examining aviation both military and civilian, 20th century military history, and defence technology. He is a regular contributor to Combat Aircraft and Aircraft Illustrated magazines. He is on the editorial staff of both Guideline Publications and Aeroplane.

Born in 1970, Tom Cooper is a native of Vienna, Austria. His travels in Europe and the Middle East have enabled him to establish excellent contacts with many informed sources in Iran, whose experiences can be found in his books and articles. An early fascination with military aviation post-World War 2 has narrowed down to an interest in smaller air forces and conflicts, particularly the Arab and the Iranian air force and the Iraq-Iran war, about which his researches date from the late 1980s.

Book Description Amber Books Ltd, 2010. Condition: Good. This is an ex-library book and may have the usual library/used-book markings inside.This book has hardback covers. In good all round condition. Dust Jacket in good condition. Seller Inventory # 8228928

Book Description Condition: Good. The item shows wear from consistent use, but it remains in good condition and works perfectly. All pages and cover are intact (including the dust cover, if applicable). Spine may show signs of wear. Pages may include limited notes and highlighting. May NOT include discs, access code or other supplemental materials. Seller Inventory # 31UJRV000TVP_ns