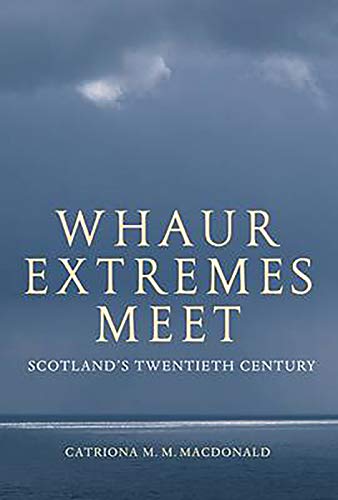 On the cusp of memory and history, the story of Scotland's twentieth-century is contested territory: international yet parochial; prosperous yet ailing; and, passionate yet temperate. This thematic account of Scotland's twentieth century examines the economic, social, political and cultural aspects that shaped the country during the period. Catroina MacDonald underlines the tensions inherent in the life of a nation distinguished by stark changes and surprising continuities, a fragmented identity, a shifting and at times uneasy accommodation in the UK nation state, and an ongoing engagement with globalising tendencies. In identifying the choices, ambitions, possibilities and contradictions that Scotland experienced during a century of profound change, she uncovers a country in which one can truly say extremes met.

"A splendid book. It's punchy, personal, and provocative. Richly detailed, yet with an impressive sweep through the big economic, political and social issues of the past century, this is a hugely readable book that manages to fascinate as well as inform." --Christopher A. Whatley, Foundation for the Development of the Education System

Catriona MacDonald was born in Glasgow and educated at the universities of St Andrews (MA Hons) and Strathclyde (PhD). She is currently a Senior Lecturer in History at Glasgow Caledonian University and is author of The Radical Thread (2000), editor of Unionist Scotland (1998) and co-editor of Scotland and the Great War (1999).