Items related to The Shepherd Lord 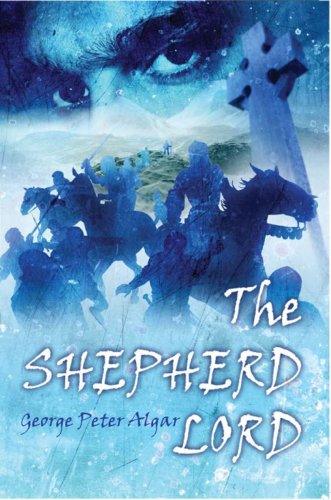 This book delves into one of the most extraordinary periods of English history and acts as a prism into the multi-faceted affairs of the time. Based on a true story, that has been all but ignored for centuries, it is now bursting to be told.

The basis for this novel is a true story. When John, 9th Lord Clifford, was killed at the battle of Towton his children were in great danger. While his younger son was sent overseas, Henry, the older son, was sent into hiding in the north of England. He was entrusted to his former wet nurse, and to her shepherd husband, and for the next two decades was raised in safety before emerging to reclaim his title after Henry Tudor's victory at the Battle of Bosworth. Algar had taken the limited facts known to us about this period, combined them with some local traditions (many recorded in ballads), and then filled the gaps with his own take on events to produce an entertaining novel that followed the young Henry during the period between the two battles, and from his original refuge in Yorkshire to final safety in Westmorland. This main central section is almost entirely fictional, as very little is known about Henry's life in this period. The main character, Tom Lawkland, the shepherd who raises Henry as his son, is also fictional, but is a well thought-out figure. Algar also includes two poems that mention the story, the most interesting being The Nut Brown Maid, a poem that was almost lost before being rescued by Samuel Pepys. This is an entertaining read that tells one of those amazing true stories that are almost stranger than fiction in the first place. I look forward to the planned sequel, which will look at Henry's life after his return to public life --History of War

'The Shepherd Lord' is saturated with passionate understanding of Yorkshire's past in a way that puts more conventional historical accounts to shame. In truth, it is a remarkable achievement: the sights, the voices, the very smell of this turbulent age seem to rise from the page. With spellbinding realism, George Peter Algar tells the tale of a young Lord, who is spirited away by his murdered father's shepherd, to the safety of the Yorkshire Dales, chased by an ever more malevolent and brutal Yorkist regime. With every chapter, the reader becomes engrossed in a tale of desperation and triumph against adversity. Though it does not shy away from dark themes, the overall effect of this novel is extremely uplifting. With the same gritty realism often found in works of literature (or indeed music or film) from Yorkshire, 'The Shepherd Lord' depicts the adventures of an everyman whose humility and loyalty see him prosper against more powerful, but morally corrupt foes. I felt the same way when I saw the fantastic film Kes for the first time. Though this was not necessarily a story about things I had experienced, the hero Tom Lawkland, was someone I could identify with, or rather, aspire to be. In short, this is a top class read by a master of historical drama. --Les Hutton

Just finished it. Marvellous. This is an anthem for Yorkshire. It should be on every Tyke's bookshelf along with the King James' bible and the Complete Works of Shakespeare. I loved the chapter at the court of King Henry VII - it was as comical as 'A Yankee at the court of King Arthur.' The rest of it is full of realism and grit. --S Hedley

The Shepherd Lord is a fascinating, but largely forgotten episode from medieval English history, rummaged from the shadows of two dusty poems and brought back to life. Set in the 15th century, against the backdrop of the Wars of the Roses, it is the story of Henry Clifford, the aristocrat who was raised as a shepherd.

This is a work of fiction but set on a firm basis of well-researched historical fact. The important issue in this type of novel is how well the author has rendered the tale as a dramatic adventure. The answer, in this case, is very well indeed. It's an involving and deeply human story of danger, companionship, high emotions and all the other elements required of a gripping tale.

Although this book is built around an adventure story, it is primarily its sense of character that engages the reader. This is fitting as it is really a novel about identity, roots and upbringing. The result is a very strong sense of period and place.

I enjoyed this novel, and recommend it highly.

Book Description Melrose Books. Paperback. Condition: GOOD. Spine creases, wear to binding and pages from reading. May contain limited notes, underlining or highlighting that does affect the text. Possible ex library copy, will have the markings and stickers associated from the library. Accessories such as CD, codes, toys, may not be included. Seller Inventory # 2988121046

Book Description Paperback. Condition: Very Good. The book has been read, but is in excellent condition. Pages are intact and not marred by notes or highlighting. The spine remains undamaged. Seller Inventory # GOR001861260

Book Description Melrose Books, 2009. Condition: Good. A+ Customer service! Satisfaction Guaranteed! Book is in Used-Good condition. Pages and cover are clean and intact. Used items may not include supplementary materials such as CDs or access codes. May show signs of minor shelf wear and contain limited notes and highlighting. Seller Inventory # 1906561966-2-4

Book Description Melrose Books, 2009. Condition: Good. 1st. Shows some signs of wear, and may have some markings on the inside. Seller Inventory # GRP115852064