Items related to The Struggle with the Daemon: Holderlin Kleist Nietzsche...

The Struggle with the Daemon: Holderlin Kleist Nietzsche (B-Format Paperback) 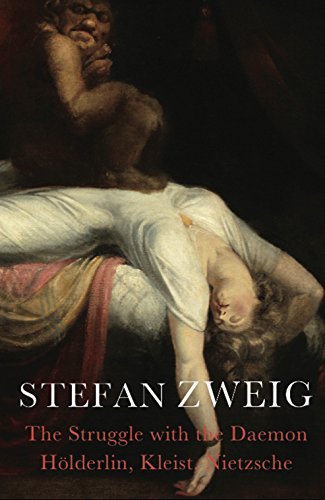 The Struggle with the Daemon is a brilliant analysis of the European psyche by the great novelist and biographer Stefan Zweig. Zweig studies three giants of German literature and thought: Friedrich Hölderlin, Heinrich von Kleist and Friedrich Nietzsche powerful minds whose ideas were at odds with the scientific positivism of their age; troubled spirits whose intoxicating passions drove them mad but inspired them to great works. In their struggle with their inner creative force, Zweig reflects the conflict at the heart of the European soul between science and art, reason and inspiration. Both highly personal and philosophically wide-ranging, this is one of the most fascinating of Zweig s renowned biographical studies.

"What did Zweig have that brought him the fanatical devotion of millions of readers, the admiration of Herman Hesse, the invitation to give the eulogy at the funeral of Sigmund Freud? To learn that, we would have to have a biography that illuminated all aspects of his work, that read all of his books, and that challenged, rather than accepted, the apparent modesty of his statements about his life and work." - Benjamin Moser, Bookforum

"Zweig's readability made him one of the most popular writers of the early twentieth century all over the world, with translations into thirty languages. His lives of Mary Stuart and Marie Antoinette were international bestsellers." -- Julie Kavanagh, The Economist Intelligent Life "Zweig's accumulated historical and cultural studies, whether in essay or monograph form, remain a body of achievement almost too impressive to take in... Full-sized books on Marie-Antoinette, Mary Stuart, and Magellan were international best sellers." -- Clive James, Cultural Amnesia

"Touching and delightful. Those adjectives are not meant as faint praise. Zweig may be especially appealing now because rather than being a progenitor of big ideas, he was a serious entertainer, and an ardent and careful observer of habits, foibles, passions and mistakes." -- A.O. Scott, The New York Times "Stefan Zweig cherished the everyday imperfections and frustrated aspirations of the men and women he analysed with such affection and understanding." -- Paul Bailey, Times Literary Supplement About the Author:

Stefan Zweig (1881-1942) was born in Vienna, a member of a wealthy Austrian-Jewish family. He studied in Berlin and Vienna and was first known as a poet and translator, then as a biographer. Zweig travelled widely, living in Salzburg between the wars, and enjoyed literary fame. His stories and novellas were collected in 1934. In the same year, with the rise of Nazism, he briefly moved to London, taking British citizenship. After a short period in New York, he settled in Brazil where in 1942 he and his wife were found dead in bed in an apparent double suicide.

1. The Struggle with the Daemon: Hölderlin, Kleist and Nietzsche

2. The Struggle with the Daemon: Hölderlin, Kleist and Nietzsche