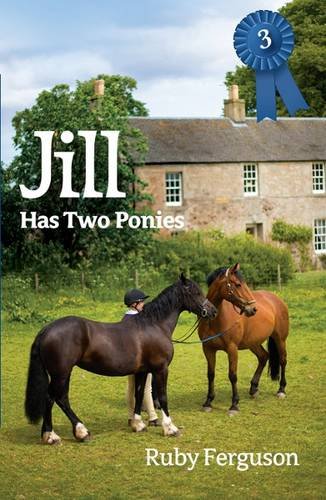 Jill Crewe thought her dreams had come true when she got Black Boy, her beloved first pony. Then she gets the chance to buy another pony. It seems too good to be true when Jill buys Rapide, a successful show jumper. But has Jill done the right thing? Rapide likes everyone else at the stables, but he's not at all keen on her. Should she sell him? Or keep on trying, hoping she and Rapide will click? Jill can't decide. When Mrs Darcy, the owner of the local stables, has to go away, Jill finds she has plenty of other things to think about. When she and her friends take charge of the stables, they have to cope with pushy parents and spoiled children and then Mrs Darcy's precious show jumper, Blue Smoke, goes down with a mysterious illness. Will the stables survive Mrs Darcy's absence? And will Jill have to give up on Rapide?

Ruby Ferguson, born in West Yorkshire in 1899, attended Bradford Girls' Grammar School and then read English at St Hilda's College, Oxford between 1919 and 1922. After completing her MA, Ruby Ferguson moved to Manchester and started working as a secretary. Her writing career really began when she entered some detective stories in a competition in the Manchester Evening News. Her first full length novel was published in 1926, under the name R. C. Ashby, and she continued writing under this name until her marriage in 1934. The books for which Ferguson is best known are those about Jill Crewe and her ponies which she wrote for her step-grandchildren. Her final book, published in 1967, the year after her death, is titled The Children at the Shop and is a fictionalized autobiography of her childhood.

Book Description Paperback. Condition: Very Good. The book has been read, but is in excellent condition. Pages are intact and not marred by notes or highlighting. The spine remains undamaged. Seller Inventory # GOR006334100