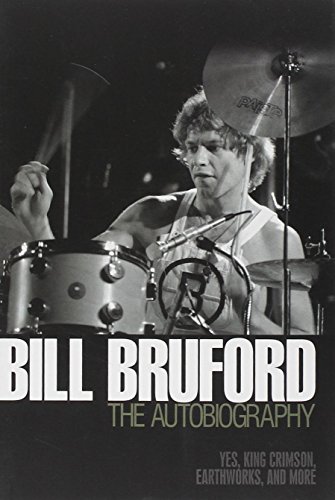 Once called the â€œgodfather of progressive drumming,â€ Bill Bruford has been at the top of his profession for four decades, playing with Yes, King Crimson, Genesis, Earthworks, and many other bands. Bill Bruford is a first-person account of his life in progressive rock, art rock, and modern jazz. Honest, entertaining, and eloquent, it recounts his life on the road and in the studio, rubbing shoulders and creating music with the famous, the less famous, and the infamous. A rocker with the temperament of a classical musician, who became a jazz musician, he defies all the cliches and bad jokes about drummers. At polite dinner parties, Bruford is occasionally asked what he does. After replying that heâ€TMs a musician, the inevitable retort is â€œYes, but what do you really do?â€ This funny, unusual, and unusually thoughtful memoir answers the question.

"An extended treatise on the nature of music itself; not just his place in the pantheon, not just the manifold trials, tribulations and emotional upheavals of the working musician in a marginal genre, but the very essence...Professorial in its remit and written with a bone-dry wit and an authoritative elegance that will be the envy of many far more high-profile cultural commentators."

Bill Bruford - once called 'the godfather of progressive-rock drumming' - has been at the top of his profession for four decades, playing with Yes, King Crimson, Genesis, Earthworks, and many more. This is his memoir of life at the heart of prog rock, art rock, and modern jazz. It is an honest, entertaining, well-written account of life on the road and in the studio - rubbing shoulders with the famous, the less famous, and the infamous, and creating an impressive tally of great music.A rock musician with the temperament of a classical musician who became a jazz musician, Bruford defies all the cliches about drummers. He says: 'You write what you have to write, you play what you have to play, because you can't sleep at night. If you can sleep at night, you shouldn't be doing this anyway'. From time to time, at polite dinner parties, someone will ask Bill what he does. He replies that he is a musician. 'Yes, but what do you really do?' retorts the enquirer. This unusual, funny, and insightful music memoir answers the question.