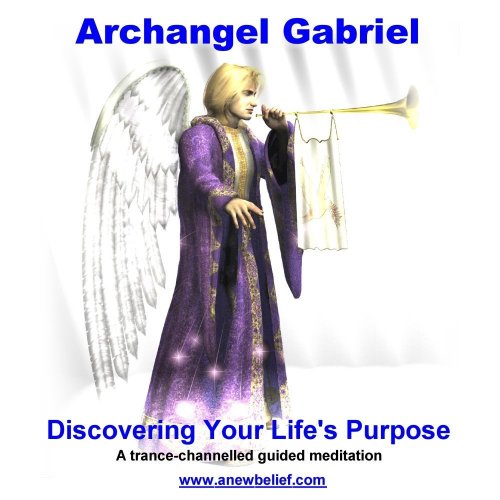 Guided Meditation CD number 4 in a series of guided meditations for spiritual and personal development; directly from the Archangels and Ascended Masters through trance-channeller Jill Harrison. Meet with Archangel Gabriel in this beautiful guided meditation, and travel back in time, to a time when you were very young and at your happiest. Discover what you were destined to do, from an early age by connecting with Archangel Gabriel and find your life's purpose. In this guided meditation you'll discover what your natural talents are. Perhaps you were a natural nurturer, or maybe an adventurer, whether you liked to play alone in a far far away place or with friends; allow Archangel Gabriel to give you insights into how you can make your life more fulfilling and rewarding. You will be taken forward in time, to a point two years from now, to see what your life will be like, if you stay on your current path and don't make changes. What you see, is what you are presently working towards. If you don't like what you see; you can change your future, by changing your present. This wonderful trance-channelled meditation is about empowerment and inspiring you to become all that you were destined to be, so allow Archangel Gabriel to steer you towards ultimate balance in your mind, body and spirit. Tracks; Introduction - Glenn 04:05 Meditation - Glenn 32:18 Meditation - Jill 27:44

Reviewer: Kate Cassidy from UK... Great CD!!! Very calming and relaxing music and you can choose between 2 voices (male and female). Buy a lot of meditations CD before from different spiritual authors, but was irritated by voice or music. Already have 6 Cd`s from their collection and very happy. Recommend to everybody!!! --Record kept in our office.

Who are Glenn and Jill Harrison? Glenn Harrison was born in Sheffield, England, UK, in 1954. He was brought up in some of the roughest parts of Sheffield and quickly learnt the meaning of survival of the fittest . His family upbringing was a hard lesson, with little or no family loving interaction. He quickly became a hard unloving man, who was afraid of giving love in case he was taken advantage of . Although baptised as a Church of England Christian, his family never followed the faith and Glenn quickly became an atheist. He went through an extraordinary amount of pain in his life; both physical and emotional; to the extent that it would have buried most people. A series of significant emotional events in 1993 transformed Glenn into a more caring, emotionally intelligent person. In 1994 he met Jill, who has become his wife, lover, business partner, best friend, co-author and spiritual soul-mate over the last 13 years, as we write this book in 2006/7. In 1996 he established a training company, which developed into teaching people Emotional Intelligence and better communication skills. In 2005 he was contacted by angels; which for an atheist, freaked him out. Laughing it off at first, Glenn had to sit up and take notice, as over months, the angels persisted in contacting him. Glenn was given a mission: Ease their pain. Jill Harrison was born in the neighbouring steel town to Glenn, in Rotherham in 1963. At the very early age of around 4 years old, her psychic abilities became noticed. Jill would see a grey lady occasionally. Usually at the top of the stairs in their home. This grey lady , in hindsight, Jill describes as translucent; as you would typically imagine a ghost; yet she was too young to understand what a ghost was. The lady seemed real to Jill. Jill recalls the lady was short in height, around 5 0 (1.5m); quite plump; dressed smartly in Victorian housemaid type clothing; and always greeted her with warmth, with a smile on her face Fortunately, Jill's mother was open-minded about psychic abilities; and unlike most parents, didn t dismiss Jill s imaginary friend. That is... until the events which started to occur. Each time the grey lady appeared, Jill would tell her mother; and within days, they would be told of a death in the family. It got to the point where Jill s mum, on hearing of the grey lady , would start ringing up family to find out who was ill, in anticipation of her fears of another death. This soon led to Jill s visions being suppressed by the family. At school, she would forecast similar events, which made her unpopular. She was quickly branded a witch and knick-named Beamish . These guided meditation CDs and our books are the first of many; dedicated to... All the people who want to connect to God; light; the one conscious creative energy. All the lost children's souls who didn't get the love and affection a child so dearly wants and needs. All the people who were abused as children. All those parents today that simply don't understand that they have children who are craving their love and attention; but fail to see it, leaving their children with the belief that they don't deserve love, and opening them to the emotional trauma of not feeling loved. All the people who are in emotional pain and feel they have no-one to turn to or believe in. All the people who have no religion; yet are still searching for a new belief. All the people who want to know the truth behind religion. All the people that have forgone, or doubt their spiritual beliefs or their religion. All the people who feel there is no hope and have no spiritual beliefs, one way or the other, regarding spiritual matters. All the people who wish to develop themselves and become more highly evolved. See www.anewbelief.com.