Items related to The Crazyladies of Pearl Street: A Memoir

Trevanian The Crazyladies of Pearl Street: A Memoir

The Crazyladies of Pearl Street: A Memoir 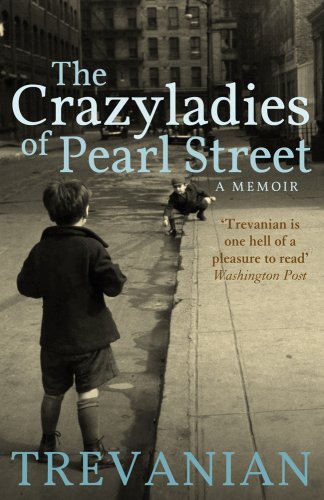 This classic memoir of a colourful but poverty-stricken childhood opens on St Patrick s Day, 1936. Abandoned once again by the feckless father of the family, the six-year-old author, his younger sister Anne-Marie and their spirited but fragile mother are suddenly thrown back on their own resources in an America mired in Depression. Without ever descending into mawkish sentimentality, Trevanian brilliantly describes his coming-of-age in the heart of the Irish slum, surrounded by grinding poverty, unemployment and the eccentric crazyladies of the title.

"My sister, my mother and I sat in a row on the front stoop of 238 North Pearl Street, feeling overwhelmed and diminished by the unfamiliar bustle of the big city. Beside the stoop was a stack of twine-bound cardboard boxes bulging with bedding, clothing and kitchen things. Around them were clustered our few scraps of furniture looking scuffed and shabby in the unforgiving glare of daylight. It was Saint Patrick's Day, and the mid-March sun felt good, but chill winter air still lurked in the shadows.The year was 1936; I was six years old, my sister was three, my mother was twenty-seven, and we were beginning a new life."This vibrant and touching memoir opens on St Patrick's Day, 1936, with America in the throws of the Great Depression. The six-year-old author, his youngest sister Anne-Marie and their spirited but vunerable mother have just arrived on the porch of their new house in Albany, NY, where the feckless, often absent father of the family has promised a brave new life will begin. But, true to form, he never shows up, and the trio are thrown back once again on their own resources.

For the next eight years, through the end of the Great Depression and into WWII, they live in the heart of the Irish slum, surrounded by ward heelers, unemployment and grinding poverty, as well as the eccentric 'crazyladies' of the title.Told from the point of view of the author's younger self without self-pity but with honesty, candour and a meticulous eye for period detail, "The Crazyladies of Pearl Street" offers a marvellous portrait of a child forced to grow up too fast, and a neighbourhood, a city and a whole nation made up of people waiting for a better life to come.

1. The Crazyladies of Pearl Street: A Memoir

Book Description Paperback. Condition: Very Good. The book has been read, but is in excellent condition. Pages are intact and not marred by notes or highlighting. The spine remains undamaged. Seller Inventory # GOR001526339

2. The Crazyladies of Pearl Street: A Memoir

Book Description -. Paperback. Condition: Very Good. The Crazyladies of Pearl Street: A Memoir This book is in very good condition and will be shipped within 24 hours of ordering. The cover may have some limited signs of wear but the pages are clean, intact and the spine remains undamaged. This book has clearly been well maintained and looked after thus far. Money back guarantee if you are not satisfied. See all our books here, order more than 1 book and get discounted shipping. Seller Inventory # 7719-9781905847396

3. The Crazyladies of Pearl Street: A Memoir

Book Description Old Street, 2008. Paperback. Condition: Good. Ex library copy with usual stamps/stickers Good condition is defined as: a copy that has been read but remains in clean condition. All of the pages are intact and the cover is intact and the spine may show signs of wear. The book may have minor markings which are not specifically mentioned. Most items will be dispatched the same or the next working day. Seller Inventory # mon0010551763

4. The Crazyladies of Pearl Street: A Memoir

Book Description Old Street, 2008. Paperback. Condition: Good. Ex-Library Book. Has usual library markings and stamps inside. All orders are dispatched the following working day from our UK warehouse. Established in 2004, we have over 500,000 books in stock. No quibble refund if not completely satisfied. Seller Inventory # mon0003904436