Items related to The Red Book - The Membership List of the Right Club...

Saikia, Robin The Red Book - The Membership List of the Right Club - 1939 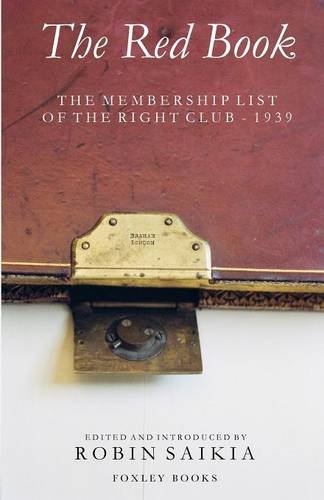 In May 1939 Captain Archibald Maule Ramsay, a Tory MP, formed an anti-Semitic secret society he called The Right Club. Many of its members were Nazi sympathisers and an inner core were politicians, peers of the realm, prominent socialites and officers in the armed forces. Ramsay recorded their names in a stout, red, leather-bound ledger that was seized by Special Branch in May 1940. It came to be known as The Red Book and its contents are published here in full for the first time. Robin Saikia provides expert analysis of Ramsay's life and times and a full A-Z of Right Club members with illuminating biographies where known. The book highlights the evils of right wing extremism, pointing out that some Right Club members were the founding fathers of racist groups still active today. Robin Saikia was educated at Winchester College and Merton College, Oxford. He is the author of Blue Guide Hay-on-Wye, a cultural and historical exploration of the Anglo-Welsh border town famed for its bookdealers and as the venue of the annual Guardian Hay Festival of Literature and the Arts. His latest book, The Venice Lido, is published by Blue Guides this summer. Forthcoming titles for Foxley Books include Hitler's Venice and Hitler's London.