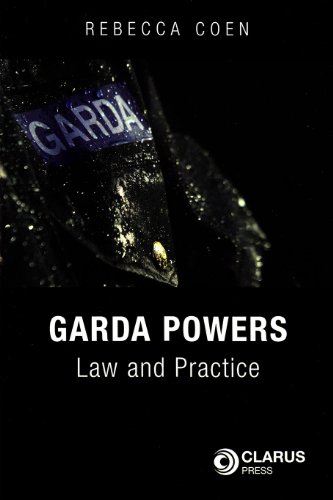 The police force in Ireland - known as the Gardai ("Guardian") - are required to combine technical and legal proficiency in the prevention and detection of crime. Expected to intervene in every kind of emergency, Gardai investigate a diverse array of offenses, combining skills in crowd control, crime scene management, intelligence-gathering, and the collection and analysis of forensic evidence. In order to fulfill their various functions, the Gardai are vested with an extraordinary array of powers - powers which facilitate surveillance; the taking of forensic samples; photographs and fingerprints; stopping, searching, and arresting individuals; as well as searching homes and vehicles. Suspects are detained and questioned, children are taken into emergency care, mentally ill persons are taken into custody. Each situation is not only complicated on a human level, but on a legal level as well, as the powers exercised intersect with constitutional and legal rights to liberty, privacy, bodily integrity, freedom of association, and expression. In England and Wales, the Police and Criminal Evidence Act 1984 is accompanied by extensive PACE Codes of Conduct. There is a core framework of police powers and safeguards - clearly laid out - around stop and search, arrest, detention, investigation, identification, and interviewing detainees. However, in Ireland, an unwieldy array of legislation and case-law must be sifted through to decipher the applicable principles. The pace of legislative change in Irish criminal justice, combined with the practice of amending Acts piecemeal rather than by consolidation, makes identification of the extent and scope of the powers of the Gardai a challenge which is grappled with by Gardai and legal practitioners alike. This book examines Garda powers and the legal issues which arise in their exercise, with an emphasis on the practicalities of policing. The law is distilled to determine the origin of key powers and the pre-requisites and practical aspects of their lawful exercise. The approaches of the courts and police forces of other common-law jurisdictions to particular policing questions are considered. Best practice guidance has been incorporated, grounded in human rights principles and international standards.