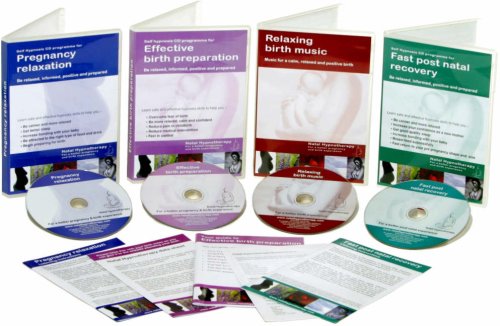 "The Natal Hypnotherapy Programme" has been designed to give you the maximum benefit, practice and experience of using these powerful techniques to ensure you have a truly wonderful pregnancy and birth experience. It is a four step programme which builds your skills, abilities and confidence in your body. The "Pregnancy Relaxation CD" will help you: increase your energy and feelings of well being; getting improved sleep; maintain a healthy blood pressure; reduce, even eliminate aches and pains; increase communication with your baby; maintain a feeling of calm and relaxation; and, learn techniques that will help with giving birth. The "Home Birth Preparation or Birth Preparation (hospital)" will help you: reduce fear of giving birth; increase your ability to manage and reduce pain; develop a deep trust of your bodies ability to give birth naturally; feel calm, relaxed and prepared for the birth; increase your sense of being in control; increase your chance of having a drug fee labour; and, reduce the chances of having post natal depression. The "Relaxing birth music CD" will help you to: enhance the deep relaxation you can achieve by listening to the music CD during labour. It acts as a subconscious trigger to relax and recall all the positive suggestions you will take in while listening to the birth preparation CD. The "Fast Post Natal recovery CD" will help you to: increase your confidence as a new mother; recover at a faster rate; have easy, natural lactation and breastfeeding; have a deep refreshing sleep (even if it is only for half an hour); return fast to pre-pregnancy shape and size; have a sense of calm and tranquillity; have an increased bond with your baby; and, have a decreased chance of post natal depression.

Sarah Oakley-Mudge 6th February 2006 Home/water birth Listened to the Home birth CD 20+ times "My birth was wonderful - exactly as I wanted. Everything went really smoothly, 12 hours duration, no tears, felt in control whole time. The CDs helped me feel like I was taking control of my birth preparation - Thank you!" Julie Walford 28th November Home birth Listened to the Home birth CD 20+ times During my pregnancy I found that listening to the CDs made me take time to concentrate on myself and baby during busy life and mentally prepare me for what was to come. I went 7 days overdue and was despairing as wanted home birth and was getting to point of hospital induction. I then went into labour at 7:30am or became aware of it then- bleeding and pains. I had been at 4cm dilated for 2 weeks and had 3 membrane sweeps to induce labour but with no success. Contractions one on top of another within the hour. Tried to have a bath but felt restricted so laid on floor until independent midwife arrived. I crawled into the pool in the living room and instantly relaxed and the contractions became more manageable. After about one hour I put the CD on the personal stereo and my notes record that within 20 minutes I was relaxing throughout strong contractions and sleeping in-between. This was amazing and purely down to the CD preparation. Pushing stage took 1 hours still in water and my baby girl was born in the water - no tearing or damage. I used gas and air at the end of pushing stage to focus breathing. Very positive and fulfilling experience - felt amazing afterwards - CDs were great!! Lucy Hartwright 4th November 2005 Home birth Listened to the Pregnancy relaxation and Home birth CD 20+ times The CDs helped me have such a sense of deep relaxation, reassurance and confidence that my body had an innate ability to cope well with birth. I felt extremely refreshed after listening to the CDs. I wasn't sure if I had taken in the messages as I often felt as if I'd fallen asleep. Also I wasn't sure how the relaxation technique would work with an active labour - but it did! Having my baby at home meant I was totally relaxed. She was eventually born in the bath and the warm water definitely helped me to relax." Zoe Percy - 1st time mother Home Birth 28th October 2004 Listened to the Home birth CD 20+ times "My waters broke at 2am followed by a show at 9am. As I was three weeks early I did not really think I was in labour. However at 12.30 it was like flicking a switch and my contractions came 2 mins apart. I did not feel scared or out of control, just like there was a job to be done and I needed to get on with it, my husband says it was like I was in a world of my own, totally focused. The midwives arrived at 1pm and the next 3 hours whizzed by. Calmly and really peacefully our beautiful Violet came into our lives at 4 pm!! She was perfect !! 3. 5 hours (which seemed like an hour) and dare, I say it was a very enjoyable birth! I was able to focus all my energy into giving birth naturally and confidently. Thank you !!" Alexandra Carter - 1st time mother Home Birth 15th February, 2005 Listened to the Home birth preparation CD 20+ times "I am writing this as, I'm desperate to tell you about Freddie's birth! Labour was 7 hours long! I had a bit of tummy ache the day before with the show, but hardly noticeable- and then a glass of champagne on Valentine's Day with my husband before going to bed. The next morning at 5.50am my waters broke and contractions started straight away. The midwife arrived at about 8:30am and was very surprised to find I was 8 1/2 cm dilated, and at 12:43pm Freddie was born. The midwives couldn't believe how calm I was. I don't take any credit for this as I'm not at all brave normally, but they were very surprised that it was my first baby as I seemed "so calm and so in control." The midwives invented a time for the start of labour as midnight since they didn't believe it could have happened so quickly from 6 am to 8:30, but they still couldn't believe I'd slept through the rest of the dilation during the night. I knew it would help me as I'd been at my sister's birth 4 years ago, and been quite traumatised by it, but I had no idea Natal Hypnotherapy would add up to such a feeling of being able to cope with it, being unafraid, and being able to control the intensity of the contractions with the dial- when the midwives arrived I was chanting- 5,5,5, 4,4,3,2,1... & apparently I was smiling all the way through it. I really never could have imagined an easier birth! If anyone wants to know, I just keep extolling the virtues of hypnosis. Amazing."

Maggie Howell Founder of Natal Hypnotherapy Having learnt self-hypnosis while pregnant, to help with the birth of her first child, Maggie Howell went on to give birth to her eldest son, Joseph, at home in a relaxed and comfortable environment: "When Maggie first mentioned that she was going to use self-hypnosis for her first labour, I was sceptical as to whether she would be able to achieve this. During her labour I was happy to be proved wrong. Her ability to remain relaxed, totally in control, yet fully communicative throughout the experience was impressive." Judy Aitkin, NHS midwife. Ria Haydon, NHS midwife agrees: "Maggie's demeanour was calm. She appeared to be 'sleeping' during most of her contractions, breathing slightly more deeply as they peaked. She used no pharmacological methods of pain relief and conducted her labour and delivery entirely under self-hypnosis. She appeared to experience no pain and very little discomfort throughout." The midwives were so impressed with the effects that they asked Maggie to talk to local antenatal clinics about her experiences. Maggie then decided to give up a successful career in the events and conference industry and train to be a Clinical Hypnotherapist. The aim then, and now, was to use the power of hypnosis to help women overcome their fear of birth and enable them to be more in control and manage the physical sensations involved in child birth. Maggie developed the Natal Hypnotherapy CDs as a result of her research and hypnotherapy work with individual mothers and antenatal groups. She has since used the techniques herself for the births of her second and third son. Maggie is a Doula (trained birth companion) and currently works with midwives, antenatal groups and hospitals running workshops and classes. She also runs 'effective birth preparation' courses for couples teaching them how to use hypnosis for an instinctive birth as well as training workshops for birth professionals. Cont/... -2- Maggie Howell Media Experience * TV - This Morning, London Tonight and The Baby Channel * Radio - BBC Radio 2, Woman's Hour, BBC London, BBC Solent, County Sound, Radio Leeds, Radio Belfast, Radio Dublin * National newspapers - The Guardian, Daily Mail, Daily Express, Daily Mirror, Daily Telegraph, Sunday Express * Articles/comments written for magazines - Prima Baby, Mother & Baby, I'm Pregnant, NCT New Generation, Flying Start, ABC, The Mother Magazine, Doula UK Newsletter, Boots Parent * Speaking appearances - Birth Professional Training at Royal Surrey Hospital, Hull Regional Midwives Conference, National Childminding Association Conference, Parent Craft workshops at Basingstoke Hospital, attachment parenting groups and home birth groups * Resident expert - Maggie is the "natural birth " expert for the Pregnancy & Birth magazine Maggie is also currently writing a book 'Calmer Birth, Calmer Baby' which will cover key areas including: Hypnotherapy (clinical and natal); birth preparation; doula; breastfeeding; baby sign language; communication skills; attachment parenting; co sleeping and instinctive parenting.