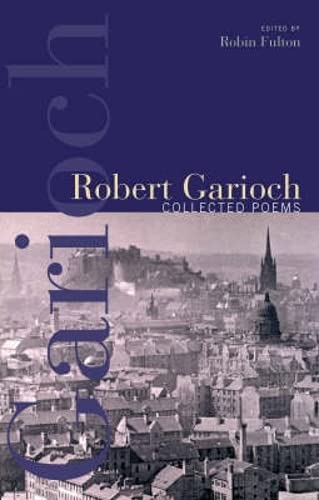 Garioch's most well-known work is his satirical and humorous verse written in Scots, such as the Edinburgh Sonnets, Embro to the Ploy and The Canny Hen. These poems offer shrewd observations of the city and its inhabitants, and Garioch himself acknowledged the influence of another of Edinburgh's great poets, Robert Fergusson, in this respect. Garioch was also well-known as the translator into Scots of authors as disparate as Apollinaire, Pindar and the nineteenth-century Roman poet Guiseppe Belli, with whom he felt a particular affinity. He also wrote an autobiographical work, Two Men and a Blanket, in which he recounts his experiences as a prisoner-of-war in Italy and Germany in the 1940s. Towards the end of his life, he was Writer-in-Residence at Edinburgh University, and also worked as lexicographer and transcriber in the School of Scottish Studies, Edinburgh University. He died in 1981. This is the first major volume of Robert Garioch's poetry in over twenty years. Unlike the previous edition of his work (1983), it follows Garioch's own ordering of his poems, includes his own notes, as well as editorial explanations for readers unfamiliar with Garioch's Edinburgh background and

Robin Fulton was born in Arran and educated at Edinburgh University. He is a published poet, whose work has appeared in German, Spanish and Swedish, and is the translator of a number of modern Scandinavian poets, including Tomas Transtromer, Henrik Nordbrandt and Olav H. Hauge. He was editor of Lines Review between 1967 and 1976, and also edited the first edition of Garioch's complete works (1983) and A Garioch Miscellany (1986). He has lived in Norway for many years.

Book Description Paperback. Condition: Fine. Fine unused condition. This book is in stock now, in our UK premises. Photos of our books are available on request (dustjacket and cover illustrations vary, and unless the image accompanying the listing is marked 'Bookseller Image', it is an Abebooks Stock Image, NOT our own). Overseas buyers please also note that shipping rates apply to packets of 750g and under, and should the packed weight of an item exceed this we reserve the right to ship via 'Economy', or request extra postage prior to fulfilling the order, or cancel. Seller Inventory # mon0000101499

Book Description Paperback. Condition: Good. Connecting readers with great books since 1972. Used books may not include companion materials, some shelf wear, may contain highlighting/notes, may not include cdrom or access codes. Customer service is our top priority!. Seller Inventory # S_309552150