Items related to Kampfflieger, Vol. 3: Bombers of the Luftwaffe January... 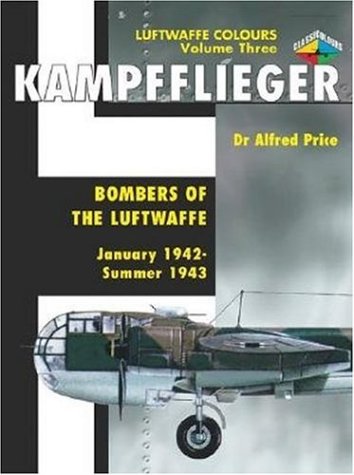 This third volume covers the Luftwaffe's bomber squadrons during the critical time from January 1942 through the summer of 1943 in all of the theatres in which they were active.

Drawing on many rare and previously unpublished photographs, this is the third volume in a four-volume study offering a pictorial account of the Luftwaffe's bomber force before and during World War 2. The series concentrates on the Luftwaffe's conventional and maritime/torpedo bomber aircraft, as well as their camouflages and markings, between 1933 and 1945, along with maps and orders of battle. Each large format paperback features 15 colour profiles illustrating camouflage schemes, tactical markings, numbering and unit insignia as employed on all fronts, as well as a number of personal accounts. This third volume examines the pivotal years of 1942 and 1943, covering theatres in North Africa, the Mediterranean and in Russia at a time when the balance of the war shifted inexorably against the Germans as a result of their defeat at Stalingrad and at El-Alamein.

With the German forces now, for the most part, in retreat, the tactics and requirements of the Luftwaffe's bomber crews changed to meet these new circumstances The four volumes in the Kampfflieger series represent the most comprehensive pictorial encyclopaedia of the aircraft and markings of the Luftwaffe's bomber force yet published. For aviation modellers and historians alike, the books are an essential reference source. Volumes 1 and 2 are already available, the final volume in the series will be published later in 2005.

2. KAMPFFLIEGER -BOMBERS OF THE LUF

3. KAMPFFLIEGER -BOMBERS OF THE LUF