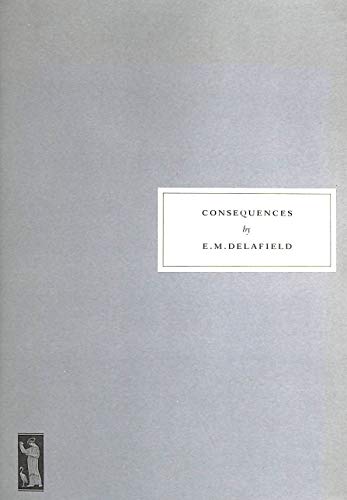 EM Delafield is best-known as the author of "The Diary of a Provincial Lady" (1930). But her favourite among her books was "Consequences" (1919), the deeply-felt novel she wrote about the plight of girls given no opportunities apart from marriage.Alex Clare is awkward and oversensitive and gets everything wrong; she refuses to marry the only young man who 'offers' and believes there is nothing left for her but to enter a convent. But that is not quite the end of her tragic story. Nor was it for EM Delafield, who also entered a convent for a year; but in her case she was able to find freedom through working as a VAD in an army hospital, 'which was emancipation of the most delirious kind. It was occupation, it was self-respect.' Like Lytton Strachey's "Eminent Victorians", written at the same time, "Consequences" is a scream of horror against Victorian values; however, its ironic tone cannot disguise EM Delafield's deeply compassionate and feminist stance. The book has provoked strong reactions from our readers. Some have found Alex's naivety implausible, others have been very much moved by the incomprehension of those around her and by the ultimate tragedy of her life.

Born to Count Henry de la Pasture and his novelist wife, Delafield (1890-1943) was brought up according to strict Late Victorian precepts, but failing to ensnare a husband, she entered a convent in Belgium the moment she was 21. Having recovered from this experience she became a VAD, (voluntary nursing for the war effort) and wrote her first novel. Delafield started publishing in her mid twenties and the year her fourth novel Consequences was published, she married Paul Dashwood, a civil engineer turned land agent; three years in Malaya was followed by life in rural Devon. Many of her novels and short stories are semi-autobiographical or stem from her experiences living abroad and in the rural countryside.