Items related to The Xenophobe's Guide to the Hungarians (Xenophobe's... 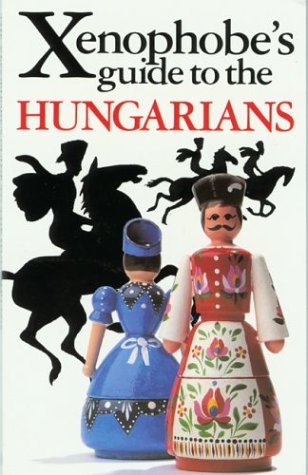 Highlights the unique character and behavior of the nation. Frank, irreverent, funny--almost guaranteed to cure Xenophobia.

Miklós Vámos lives and works in Budapest. A novelist with 19 works of fiction to his credit, his most recent title Mothers Are Not Chosen By Election topped the best-selling charts for months.

Though Vámos is Hungarian for ‘customs officer’, he always wanted to be a writer. He claims that to get a head start, he began in his mother’s womb where he complained about the dark.

He also writes film scripts. A Fulbright scholarship (1988-90) gave him a marvellous opportunity to study drama at Yale. Unfortunately, while doing so, he missed the real life drama of Hungary’s final push for freedom. As a result, he experiences a touch of paranoia every time he leaves his native land.

Mátyás Sárközi’s great-grandfather was a newspaper editor and a feared political leader writer. His grandmother was the first woman war correspondent in 1914, and his grandfather (Ferenc Molnár) wrote some internationally successful plays. His father was a lyric poet, his mother ran a literary magazine, so he wanted to be a painter. This is why when he arrived in London at the age of 19, he went to art school.

But fate had it that he, too, should become a journalist. He works as London correspondent for a Budapest daily paper and broadcasts with the BBC. Although living happily in Britain, he has always remained a Hungarian and after 40 years of residence still roams the streets of London feeling a little bit foreign. The irony is that on innumerable extended visits to his native land, he also feels a little bit foreign.

'Typical Hungarians don't recognize limits in anything they do. The best kind of Hungarian likes to demonstrate that, whatever happens, he will keep his word, provide you with what he has promised, or finish the job he was trusted with, even if he becomes half crippled in the process.
His aim, however, is not necessarily to come up with a result, but to show in the most dramatic manner that he made the effort.'
Xenophobia is an irrational fear of foreigners, probably justified, always understandable.
Xenophobe's Guides - an irreverent look at the beliefs and foibles of nations, almost guaranteed to cure Xenophobia.