Items related to The Gigantic Turnip 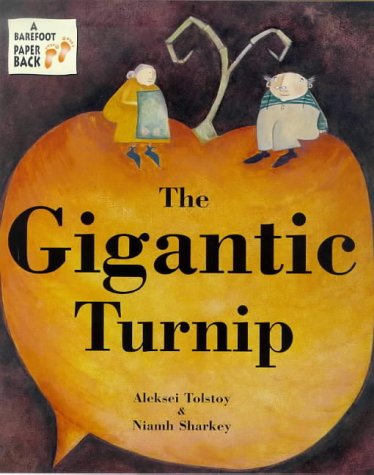 A retelling of the classic Russian tale. The old man and his wife tug and heave at the giant turnip, to be joined by various animals and birds, until it finally comes up.

Absolutely wonderful. The illustrations are stunning, and the text is funny and full of the rhythm that children love when read aloud to. -- London Parents Guide, February 2000

It is really a counting book, an animal book, and a book of the seasons all rolled into the one cyclical narrative. Read it aloud to the under sixes who will join us like the old man, followed by the old woman, joined next by the one cow, then the two pigs, three cats, four hens, five geese and six canaries all attempt to put the giant turnip out of the ground. -- Children's Books in Ireland n. 21 1999

Aleksei Tolstoy (1883-1945) was born and lived in Russia. During his four-decade literary career, he witnessed milestone historic events, both in his home country of Russia and abroad. He was a master storyteller, and wrote several children's tales as well as poems, plays and stories for adults. Award-winning Irish illustrator Niamh Sharkey works in oils on a gessoed textured background to create the richness in colour that has quickly established her as a world class illustrator. Niamh has illustratrated several best-selling Barefoot Books including Tales of Wisdom and Wonder (1998), The Gigantic Turnip (1998), Jack and the Beanstalk (1999) and Tales from Old Ireland (2000). In 1999, Niamh received the Books for Children Mother Goose Award for best new illustrator, as well as the Bisto Award, the Irish award for best illustrator. Niamh lives and works in Dublin, Ireland; she has three children.