Items related to Calculated Risk: Adventure and Romance in Scotland...

Haston, Dougal Calculated Risk: Adventure and Romance in Scotland and the Alps

Calculated Risk: Adventure and Romance in Scotland and the Alps 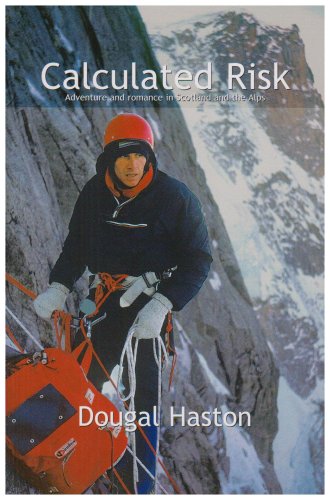 When John Dunlop gives Judy Scott a lift to Glencoe on his motorbike, both are surprised when a relationship develops. But for John all passions must be relegated to the demands of the big climb. The focus soon shifts to the Alps where he teams up with the American climber Jack McDonald. Their careful planning goes awry and a major first ascent bid turns into an intense struggle bringing disaster and tragedy. Calculated Risk is a fictional portrayal of the world of mountaineering, of climbing the most demanding routes at a time when climbing was still emerging from its primitive inter-war and post war austerities and such routes were a stark struggle against the elements. The realities and tensions of big-time climbing, firmly focussed on the Alps and the Himalaya, are revealed with greater clarity through the medium of fiction. Dougal Haston was among Britain's leading mountaineers. A controversial figure, he began climbing in Scotland, putting up numerous new routes before moving on to bigger mountains and ascents of Annapurna, Everest and Denali. He was part of the team which, in 1966, made a directtissima ascent of the North Face of the Eiger. In 1967, Haston became Director of the International School of Mountaineering at Leysin in Switzerland. He wrote Calculated Risk in 1977, shortly before his death while skiing above Leysin - an accident strangely foretold in the book.

Dougal Haston was born on the outskirts of Edinburgh in 1940. He was one of Britain's leading mountaineers and a controversial but compelling figure in climbing history. After landmark ascents in Scotland, Haston became internationally famous following his climbs on the Eiger, Annapurna, Everest and Mount McKinley (Denali). Away from climbing, Haston, known for a rock and roll lifestyle, centred on the infamous Club Vagabond in Leysin. He has often been depicted as loner, one who said: 'For me, it is hard to have a friend who is not a climber. He needs to have shared the many close-to-death experiences, and not have panicked; backs one up through trouble, and is not jealous of success. On this basis, I have few friends.' Haston served 60 days in prison for causing death by driving in 1965. Chris Bonington said of him; 'Dougal Haston was not only one of Britain's most outstanding mountaineers; he was the closest to being a cult figure,' and Haston was described by Ed Douglas as 'Bonington's secret weapon, selfish and often absent lower down the mountain, but utterly determined when it came to a summit push'. Calculated Risk was written shortly before Haston's death in 1977, and published posthumously. Haston died aged only 37 in an avalanche while skiing above Leysin - an accident strangely foretold in his novel. His obituary made it into the national newspapers, though his grave was marked only by a numbered wooden cross in a cemetery in Leysin.

2. Calculated Risk: Adventure and Romance in Scotland and the Alps