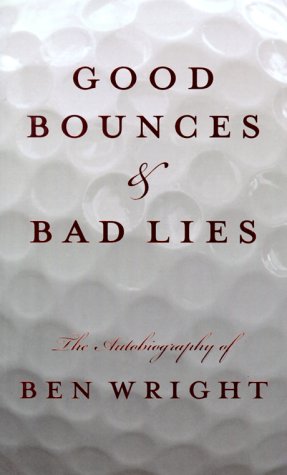 The author describes his career as a golf journalist and broadcaster, and shares ancedotes concerning the professional golfers and golfing celebrities he has known

You've got to give this to former CBS golf analyst Ben Wright:he can sure tell a story and the further he shoves his soft-spiked foot in his mouth, the better the stories. His anecdotal autobiography flits back and forth between idolatry and wickedness, and at times his pen has no governor at all. Case in point: Wright idolised Ben Hogan. He even went AWOL from the army in 1953 shamelessly, though without a trace of guilt, he admits, because it was the only way he could get off base to see Hogan win the Open at Carnoustie. (It's hard to quarrel with that.) After teeing up several tales that firmly ensconce Hogan on his pedestal, Wright finally veers off this way: These stories illustrate the kind of perfection, dedication andrespect with which GaryMcCord--Wright's fellow CBS analyst and a pretty funny guy in his own right--was wholly unfamiliar. Fore! Wright then proceeds to launch into a tale of introducing McCord to Hogan, Hogan humiliating McCord when he finds out McCord's been on tour for 17 years and has no victories, and Wright, who clearly detests McCord, getting to gloat, I told you so.

Wright likes to gloat; he does a lot of it in Good Bounces, and he's awfully entertaining--if somewhat small--when he does. He's also entertaining on the intricacies and personalities of CBS's golf broadcasts, and what an analyst must go through when he criticises a player. When Wright kept chastising Peter Jacobsen's atrocious putting, Jacobsen claimed he'd exorcised those woes by mentally imaging Wright being hoisted from theTV tower by a helicopter and flown into outer space. Which is about where Wright ultimately wound up when he hooked his career into the drink with some out-of-bounds comments about women golfers, breasts and lesbianism in 1995. He still offers a bagful of excuses for the incident which badly tarnished him, but he does treat it with appropriate seriousness and contrition. He makes no excuses, though, for the alcoholism that actually sunk him. Given the public nature of his disgrace, Good Bounces is something of a mulligan for Wright. As both raconteur and provacateur, he's made a pretty good shot of it. --Jeff Silverman