Items related to The Irish Regiments. A Pictorial History 1683-1987 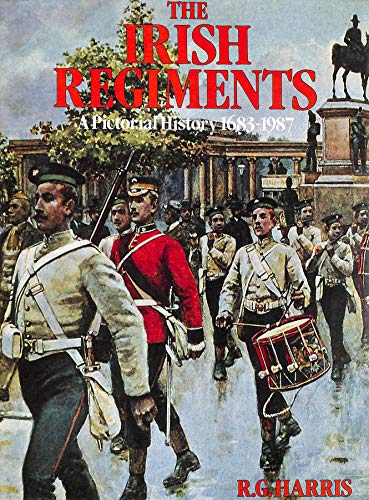 A collective history of all the Irish regiments, past and present, who have served in the British Army with such distinction during the past 300 years; during war and peace, at home and abroad. Statistics from World War I tell us that half a million Irishmen served in the British Army representing about an eighth of the population of Ireland, one third of Britain's Field Marshals came from Ireland, and half of the ten Field Marshals of WWII had Irish origins. All aspects are covered, from the early (now disbanded) regiments to the Cavalry, Infantry, Yoemanry, Special Reserves, the Territorial Force, The Royal Artillery, Militia, Volunteer and Support Units.

Book Description Hardback. Condition: Very Good. The book has been read, but is in excellent condition. Pages are intact and not marred by notes or highlighting. The spine remains undamaged. Seller Inventory # GOR007042746

2. The Irish Regiments : A Pictorial History

Book Description History Press Limited, The. Hardcover. Condition: Good. A copy that has been read, but remains in clean condition. All pages are intact, and the cover is intact. The spine may show signs of wear. Pages can include limited notes and highlighting, and the copy can include previous owner inscriptions. An ex-library book and may have standard library stamps and/or stickers. At ThriftBooks, our motto is: Read More, Spend Less. Seller Inventory # G1871876001I3N10

Book Description Nutshell Pub. Co, 1989. Condition: Good. A+ Customer service! Satisfaction Guaranteed! Book is in Used-Good condition. Pages and cover are clean and intact. Used items may not include supplementary materials such as CDs or access codes. May show signs of minor shelf wear and contain limited notes and highlighting. Seller Inventory # 1871876001-2-4

7. The Irish Regiments : A Pictorial History

Book Description The Nutshell Publishing, Tunbridge Wells, Kent, UK, 1989. Hard Cover. Condition: Very Good. Dust Jacket Condition: Very Good. Numerous Illustrations / Photographs (illustrator). Dust jacket complete, unclipped. Red cloth boards with bright gilt titling on spine. No ownership marks. Numerous illustrations / photographs. 288 pages clean and tight. Updated and republished due to popular demand, this is a superbly illustrated collective history of all the Irish regiments, past and present, which have served in the British Army with such distinction during war and peace, at home and overseas, for the last 300 years.Covered are: The Early & Disbanded Regiments o The Regular Regiments: Cavalry & Infantry o Yeomanry, Special Reserve and the Territorial Force o Royal Artillery: Militia & Volunteer o The Royal Irish Regiment, the Ulster Defence Regiment & the Royal Irish Rangers. Half a million Irishmen served in the British Army in World War I, one third of Britain's Field Marshals came from Ireland, and of the ten Field Marshals of World War II, one half had Irish origins.The nearly 400 illustrations in this book (48 in color) include action photographs and fine depictions of rarely glimpsed uniforms, as well as masterful paintings depicting actions from previous centuries. Wherever they have gone the Irish have left their mark-as a people, as a culture, almost as a state of mind. This book details in lavish style the exploits of the Irish across three centuries of warfare-through the age of Empire until the present day. has previously published three books, is a founding member of the Military Historical Society, and a long-standing member of the Society for Army Historical research. Size: 4to. Seller Inventory # 135694