Items related to The Apprentice, The

Houghton, Gordon The Apprentice, The 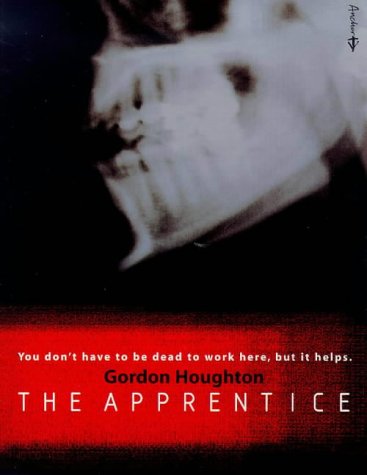 Hades is dead and the Agency needs a replacement, a new apprentice to carry on the good work, and fortunately for our zombie narrator, his number came up in the Unholy Tombola. Over the next seven days he will act as Death's apprentice, helping him to bring about seven deaths.

'We're offering you an opportunity. We're taking you on as an apprentice, and we're giving you a week to prove yourself. If you succeed you become a fully-qualified Agent with all the benefits that guarantees: immortality, steady employment, freedom from boredom, and so on and so forth.'

'You won't. You can't lose. If things don't work out, we'll just put you back. And you get to choose the manner of your own death.'

Hades is dead and the Agency needs a replacement, a new apprentice to carry on the good work. An emergency meeting is held, a resolution passed - the traditional method for selecting a new recruit will once again be used. When the coloured balls fall in the Unholy Tombola, who will be the lucky one?

72 18 9 11 12 13 49, a Code Four male aged 28 - no name, no family, no friends - is resting not-so-peacefully by the old chestnut tree in a corner of St Giles cemetery when Death, brandishing the Agency's standard contract, raps a bony knuckle on his coffin. The deal is this: over the next seven days he will act as Death's apprentice, helping him to bring about seven different deaths. If he copes with this task, the job will be his; if not, he can choose the manner of his own death. It couldn't be simpler.

In the Agency's suburban office, the apprentice meets War, Famine and Pestilence, all of whom now drive cars and use modern technology. But Death is bored - things aren't what they used to be - and over the week the newcomer witnesses some imaginative, not to say convoluted deaths. At the same time, the circumstances that led to his own death gradually filter back into his brain. And as he tingles with the memories and sensations of what it was like to be human, he stumbles over a contrivance that could change his future as well as his past. But in the face of eternity, is a week long enough for a nameless dead guy to beat the apocalypse's four world-weary car-drivers at their own game?

A gothic meditation on human frailty, death and the after-life, The Apprentice is a black comedy with a surreal edge that gives new meaning to a near death experience.

Book Description Paperback. Condition: Very Good. The book has been read, but is in excellent condition. Pages are intact and not marred by notes or highlighting. The spine remains undamaged. Seller Inventory # GOR001548659

Book Description Paperback. Condition: Fair. A readable copy of the book which may include some defects such as highlighting and notes. Cover and pages may be creased and show discolouration. Seller Inventory # GOR004655352

Book Description Anchor Books, 1999. Paperback. Condition: Good. A slight tan to page edges Good condition is defined as: a copy that has been read but remains in clean condition. All of the pages are intact and the cover is intact and the spine may show signs of wear. The book may have minor markings which are not specifically mentioned. Most items will be dispatched the same or the next working day. Seller Inventory # wbb0015275759

Book Description Anchor Books, 1999. Paperback. Condition: Used; Good. **Simply Brit** Shipped with Premium postal service within 24 hours from the UK with impressive delivery time. We have dispatched from our book depository; items of good condition to over ten million satisfied customers worldwide. We are committed to providing you with reliable and efficient service at all times. Seller Inventory # 1101182