Items related to Ninety Degrees North: The Quest For The North Pole

Ninety Degrees North: The Quest For The North Pole 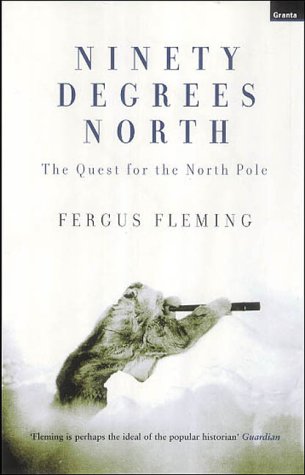 In the mid-nineteenth century the North Pole was a mystery. Some believed that it was an island of basalt in a warm crystal sea. Explorers who tried to penetrate the icy wastes failed or died. But after Sir John Franklin disappeared with all his men in 1845, serious efforts began to be made to find the true northernmost point of the globe. Fergus Fleming's book is a vivid, witty history of the disasters that ensued. The new explorers included Elisha Kane, a sickly man and useless commander, who led his team close to death in 1854, and Charles Hall, a printer from Ohio. Hall made the mistake of taking an experienced crew, who refused to commit suicide for him. Their mutiny so enraged Hall that he died of a stroke, and some of his crew escaped south on an ice floe. They were followed by the Germans, newly united and eager for their place in the ice, the Austro-Hungarians and the British, who in 1876 managed to get further than any other expedition, travelling over terrain later explorers considered impassable. They left the field to the Norwegians, to expeditions organized by the American tabloid press, Swedish baloonists, aristocratic Italians and finally to the obsessive Robert Peary, who on one trip took his pregnant wife with him in order to set a record for the most northerly birth in history. He finally made it in 1909.

The 19th-century equivalent of the race to land man on the Moon was the search for the Arctic pole, a story recounted in Fergus Fleming's Ninety Degrees North: The Quest for the North Pole. The contest began with efforts to find Sir John Franklin, who had been lost searching for the Northwest passage, but soon became a hunt for the legendary "open polar sea" in which earnest Americans, methodical Brits, strong and silent Scandinavians and even a dashing Italian prince endured the ice for months (years in some cases) in the name of patriotism. In the end, as Fleming shows, there were no real winners, but merely disputes over whose navigational geometry was most authentic; the race became instead a competition for who could get there in the most original manner--be it with ironclad ships, balloons, skis, airships or motorbikes. Only in the last 40 years did it occur to the intrepid that two feet might be best. But unlike the with Antarctica, the real epic here was not the discovery of the North Pole, but outlasting the snows, floes and Eskimoes and returning with crew intact. This book isn't a patch on Francis Spufford's stylish and prizewinning I May Be Some Time: Ice and the English Imagination, but for bringing together the accounts of the best known of the Arctic adventurers, especially the Americans and the Swedes, Fleming is to be praised.--Miles Taylor