Items related to Thief, the Cross and the Wheel: Pain and the Spectacle...

Merback, M Thief, the Cross and the Wheel: Pain and the Spectacle of Punishment in Medieval and Renaissance Europe (PICTURING HISTORY)

Thief, the Cross and the Wheel: Pain and the Spectacle of Punishment in Medieval and Renaissance Europe (PICTURING HISTORY) 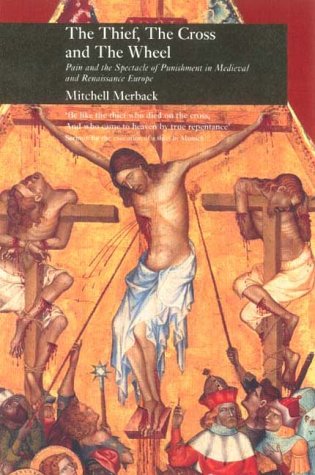 When spectators in the Middle Ages examined images of Christ's crucifixion on Mount Calvary, did they ever consider them as representations of capital punishment? In "The Thief", the Cross and the Wheel Mitchell Merback contends that they did, and traces out the extraordinary connections between religious devotion, bodily pain, criminal justice and judicial spectatorship to explain why this was so. The author's focus is not on the crucified Christ as he was represented in altarpieces during the late medieval and Renaissance eras, but on his criminal counterparts, the Two Thieves of the Gospels. Artists in Germany and elsewhere were constrained by Church doctrine as to how they could represent Christ's Passion, but were free to explore the most abject of cruelties when they turned to the Thieves. The frequently shocking images of torture and death they depicted notably the horrific process of breaking on the wheel were the preferred means of executing contemporary malefactors. In this politically informed and historically provocative book, Merback insists that pain as spectacle was central to the European experience, and warns of its contemporary re-emergence in the public sphere.

'This is a rich and learned book - whose lively contemplations make well-known images of the past pulsate vibrantly, as they must have done for some who viewed them half a millennium ago.' - TLS 'This powerful and well-illustrated work probes the relationship between images of the Crucifixion and the understanding of pain, suffering and justice - fascinating.' - History Today 'Merback's analysis is intelligent, stylishly written, and - theoretically informed - this imaginative study contain[s] chunks of extremely insightful analysis, which in combination with its sheer readability, makes it the best account of medieval penalty to come out in a very long time.' - Art History 'a well produced volume with excellent use of images, both black and white and colour, to embellish the text, but a reader will need a strong stomach to attempt to digest the material it contains. This is a horrific book, as it is intended to be.' - Art Newspaper 'This is a shocking and absorbing book, strikingly illustrated - Not for the squeamish.' - Good Book Guide 'Merback's scholarship ranges widely, and with ease.' - Church Times

1. The Thief, the Cross and the Wheel: Pain and the Spectacle of Punishment in Medieval and Renaissance