Items related to Stephane Grappelli: With and without Django

Balmer, Paul Stephane Grappelli: With and without Django

Stephane Grappelli: With and without Django 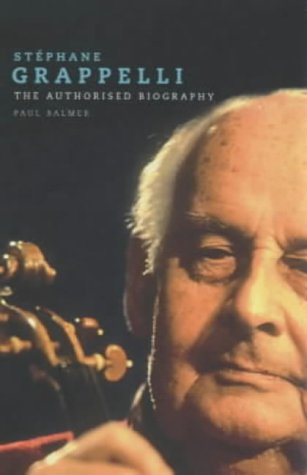 Born in Paris in 1908, Stephane Grappelli experienced every decade of the jazz century and his story spans an astonishing 77 years, during which time he performed with the great names of jazz: Duke Ellington, Dizzy Gillespie and Oscar Peterson. But it's his performances with Django Reinhardt, for which he is perhaps best remembered. Contains exclusive interviews with Stephane as well as contributions from his family and friends, much newly discovered evidence on both Stephane and Django and many previously unpublished photos. This is a slice of music history, a testament to a man who invented his own style of jazz.

Charts his up-bringing in the semi-rural slums of Montmartre, life under the Nazi rule of World War Two to his meeting with Django Rheinhardt and the emergence of Swing. His life took in the heady heights of the jazz world of the 1950s and the wide variety of musicians and singers he performed with - Art Tatum, Paul Whiteman, a fresh-faced Nigel Kennedy, and of course Bing Crosby. Unearthing countless rare photographs and memorabilia from his personal archives, as well as undertaking many interviews with surviving friends and musical contemporaries, the author also conducts the last interview before his death, making this the definitive account of this jazz legend's life and career.

Paul Balmer is a multimedia director and BBC radio presenter who first met Stephane Grappelli in 1978, and his works on the violinist include the BAFTA-nominated DVD Stephane Grappelli: A Life in The Jazz Century and the acclaimed BBC Radio programme 80 Years On The Fiddle.

2. Stephane Grappelli: With and Without Django

3. STEPHANE GRAPPELLI: WITH AND WIT

4. STEPHANE GRAPPELLI: WITH AND WIT