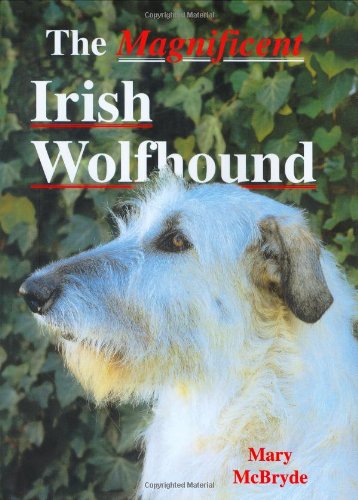 The Irish Wolfhound has an ancient history, dating back some 3,000 years. McBryde traces this biggest of all breeds to the present day, and provides advice on all a spects of caring for an Irish Wolfhound - from choosing a pu ppy to showing these dogs. '

Mary R McBryde has been involved with Irish Wolfhounds all her life, acquiring her first dog when she was fourteen, and breeding her first litter when she was just sixteen years old. Since then the Marumac kennel has gone from strength to strength - in Britain and in North America - making up many Champions, and providing foundation stock for other breeders. Among her best-known dogs are Ch. Marumac Bahbarella, who gained her title at under two years of age and went on to win 22 CCs, becoming the bitch breed record holder in Britain, and UK, US, Can. Ch. Marumac Coromandel, the only male Wolfhound to have won these three titles. Mary spent four years living in Canada, and campaigned her Wolfhounds with considerable success all over North America, winning Best in Show at the 1992 National Specialty of the Irish Wolfhound Club of America. When she returned to the UK, she bought back her own stock as well as some American imports, to introduce new bloodlines into the British gene pool. Mary is an international Championship judge and travels extensively on judging appointments.

The Irish Wolfhound, the biggest of all dog breeds, has an ancient history, dating back some 3,000 years. These giant-sized hounds were used for hunting wolf, deer and wild boar, and they were even used in battle to pull men off horseback. However, by the 19th Century numbers had dwindled, and following the Irish Famine of 1845, the breed almost died out. Fortunately, a revival took place, and today the Irish Wolfhound has a strong, enthusiastic following worldwide. This is the most comprehensive book to date on the Irish Wolfhound - indeed, it is one of the most impressive books ever published on a single breed. The Irish Wolfhound is traced through its chequered history to its emergence as an impressive show dog and a lovable, gentle companion. Extensive coverage is given to choosing and rearing a Wolfhound puppy, with particular emphasis on diet and exercise during the vital growing period. The Breed Standard is analysed in detail, and there is expert guidance on training the Wolfhound for the show ring. Using her extensive experience, the author gives invaluable advice on breeding Wolfhounds, and there is a complete section on health care and breed associated conditions. Illustrated with more than 200 top-quality colour photographs showing the breed in all aspects, this is essential reading for all Wolfhound enthusiasts.