Items related to Redemption Song: Muhammad Ali and the Spirit of the...

Marqusee, Mike Redemption Song: Muhammad Ali and the Spirit of the Sixties

Redemption Song: Muhammad Ali and the Spirit of the Sixties 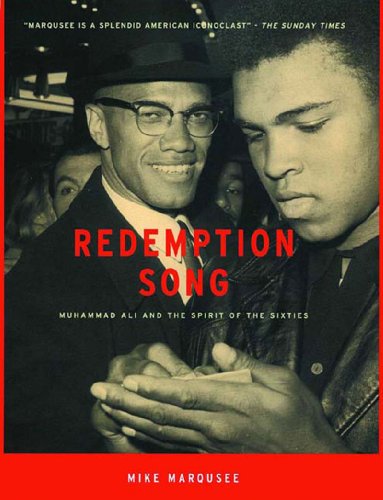 This narrative explores the origins and impact of Muhammed Ali's dramatic public stands on race and the draft. It traces his interaction with the evolving black liberation and anti-war movements and encounters with leading figures. This book offers a historical essay that re-examines Muhammed Ali's role as a symbol of dessent and uses the man as a portal to an understanding of an era. The author explains how Ali's penchant for turning events upside down often made him a symbol of heroism abroad and of disrespect for the status quo at home.

Hero to some, traitor to others, Muhammad Ali managed to land powerful punches both in and out of the ring. What changed him from athlete to personality to a heavyweight of global reach? "At the core of the Ali story", Mike Marqusee reminds us, "is a young man who made daunting choices and stuck to them in the face of ghastly threats and glittering inducements." Redemption Song explores those choices in the context of the turbulent times in which they were made.

Ali and the 60s were a naturally synergistic fit. It was a time of great change, and Ali, the seeker, had remarkable access to the fomenters of that change. They, in turn, had a prime influence on his symbolic rebirth and re-emergence. As Redemption Song recounts, the night the young Cassius Clay upset Sonny Liston for the title in 1964, he skipped the traditional post-fight party and headed straight for Miami's black ghetto where he met with Black Muslim leader Malcolm X, singer Sam Cooke and the running back Jim Brown, an early advocate of black rights in sports. The next morning, announcing to the white world that "I'm free to be what I want" and "I don't have to be what you want me to be," he confirmed rumours about his conversion to Islam.

The conversion to Islam was only one of Ali's "daunting choices". As Marqusee moves through the decade, he carefully traces Ali's choices to confront the establishment and stand as a symbol of civil rights and the anti-war effort; his relationships with Malcolm X, Joe Louis, Jackie Robinson and Martin Luther King; and the importance of his travels to Africa. There's plenty of boxing too, but Marqusee is more interested in how Ali expanded that arena to take in the kinds of fights that go beyond the ropes. It's a tall order, but Redemption Song fulfils it with solid reporting and worthy analysis. --Jeff Silverman, Amazon.com

"A beautiful book."--Arundhati Roy"Among the slew of recent Ali books, here's one that returns the political sting to 'The Greatest' ... As Marqusee portrays him, Ali is still the righteous outlaw, as badass as ever and still in the eye of a global storm."--"Time Out New York""Fascinating, well-written, entertaining and significant. "Redemption Song" provides rare and important insights into Muhammad Ali and his immense global impact on a turbulent and ground-breaking era."--Leon Gast"As Marqusee charts how Ali helped create a global consciousness, he succeeds in knocking Ali off the respectable pedestal on which American culture had placed him, resurrecting him as the radical figure he truly was ... a vibrant historical essay."--"Publishers Weekly""A thrilling book about a true and enduring hero ... Mike Marqusee has done him, and us, proud."--John Pilger"Excellent ... Reminds us just how explosive and divisive a figure Ali was."--"Independent on Sunday"

1. Redemption Song: Muhammad Ali and the Spirit of the Sixties