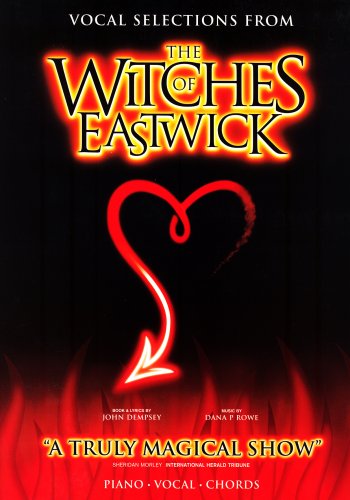 The story, based on the John Updike novel, is set in the fictional Rhode Island town of Eastwick in the late 1960s, and follows the witches Alexandra Spofford, Jane Smart, and Sukie Rougemont, who acquired their powers after leaving or being left by their husbands. Their coven is upset by the arrival of a devil-like character, Darryl Van Horne. The mysterious Darryl seduces each of the women, encouraging them to play with their powers and creating a scandal in the town. This songbook features twelve songs and has a selection of colour and black & white photographs from London's West End production of 2000 which starred Ian McShane, Lucie Arnaz, Maria Friedman and Joanna Riding. SONGS MAKE HIM MINE WAITING FOR THE MUSIC TO BEGIN WORDS, WORDS, WORDS SOMETHING DIRTY LAUNDRY I WISH I MAY ANOTHER NIGHT AT DARRYL'S DANCE WITH DEVIL EVIL LOOSE ENDS WHO'S THE MAN? LOOK AT ME

Book Description . Paperback. Condition: Very Good. The book has been read, but is in excellent condition. Pages are intact and not marred by notes or highlighting. The spine remains undamaged. Seller Inventory # GOR005451495

2. The Witches of Eastwick: the Musical

Book Description International Music Publications. Paperback. Condition: As New. An apparently unread copy in perfect condition. Dust cover is intact; pages are clean and are not marred by notes or folds of any kind. At ThriftBooks, our motto is: Read More, Spend Less. Seller Inventory # G1859099637I2N00

Book Description International Music Publications, 2000. Paperback. Condition: Good. A few small marks to page edges Good condition is defined as: a copy that has been read but remains in clean condition. All of the pages are intact and the cover is intact and the spine may show signs of wear. The book may have minor markings which are not specifically mentioned. Most items will be dispatched the same or the next working day. Seller Inventory # wbb0012783738

4. Witches of Eastwick, The: Vocal Selections

5. The Witches of Eastwick: the Musical

Book Description International Music Publications, 2000. Condition: Good. A+ Customer service! Satisfaction Guaranteed! Book is in Used-Good condition. Pages and cover are clean and intact. Used items may not include supplementary materials such as CDs or access codes. May show signs of minor shelf wear and contain limited notes and highlighting. Seller Inventory # 1859099637-2-4